To many people millet is the archetypal budgie food. The commonest varieties are white millet and the more expensive red millet, which has tougher husks. Both are actually the same species, Panicum miliaceum. The species is sometimes referred to as Proso millet. Foxtail millet (Setaria italica) and Japanese millet (Echinochloa frumentacea) are also available as budgie food.

There is no doubt that budgies love the stuff. However, its high fat content means it should be treated with a certain caution.

A good seed mix will have an appropriate millet content; but the food is commonly offered on-the-twig, in sprays. This is great stuff for finger-training budgies (see the section Finger Training Your Budgie, below), and for occasional extra snacks. Make it available too often, though, and your birds will fill their crops with this rather than the varied and well-balanced foodstuffs offered elsewhere in the cage. 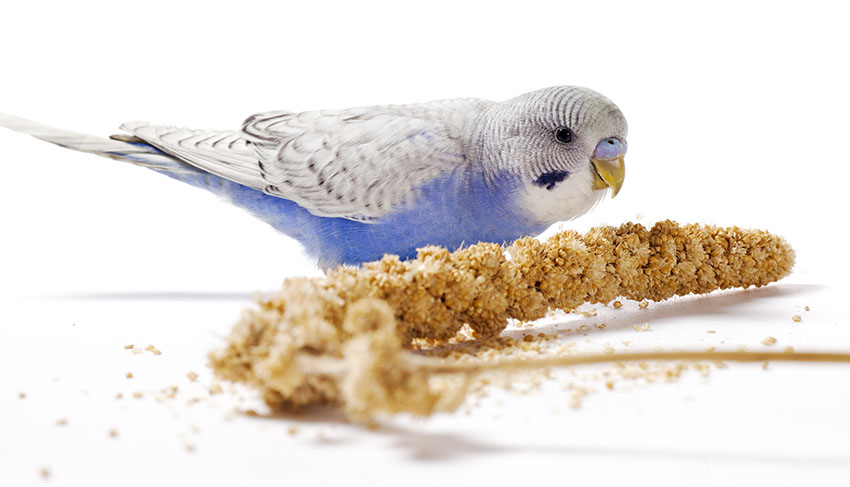 Millet is a budgie favourite


As with other seed supplies, it’s important to ensure your millet sprays are free from pesticides and other chemicals. If you find a millet source that’s a lot cheaper than others, your alarm bells should start to ring. It’s probably been imported from a mass producer, and mass production is associated with the full catalogue of spray-on nasties.

Some budgie owners report that their birds have become addicted to millet. This means they have been making the stuff too readily available, and the birds have been turned into millet junkies. If you find yourself in this position, wean your birds off the irresistible stuff slowly. Reduce the amount available during the first two days by removing the millet sprays after the budgies have breakfasted. Later in the week you can omit the spray altogether.

Once you accept that millet is a special treat, you can add it to your list of occasional goodies offered to the birds. Fasten the woody end of the spray to the cage bars, or hang it from the roof. The ensuing millet gymnastics are very entertaining, and you gain the satisfaction of knowing that the budgies are working off a bit of the extra fat that the millet will add to their waistlines. 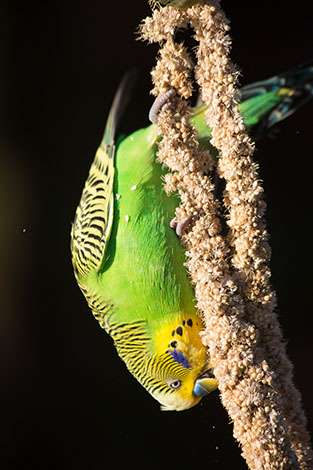 Using millet as a lure is a great way of speeding up hand or finger-training for your budgies, for getting them out, and back in, the cage. It also helps, on the bird’s early free-flight adventures, to have a spray of millet fixed inside the cage. At some point his exertions will lead to hunger, and there’s no surer way of getting him back in the cage than the presence of millet.

Millet is also invaluable when training your budgie to fly to you or perform other tricks. (See budgie Training, below).

Hi My 2yr old budgie has sloppy poops and has watery ones. He has been on baytril from the vets and has improved a little. He is eating, drinking and active, though his flying is a little less accurate and sometimes his wings seem to quiver when sat. Going to the vet caused him great anxiety. Have you ever come across this before. He has free reign of a double bedroom most of the day and evening with his 12.5yr old house bunny roomy who has had fleas. The vet saw no mites on him. Would you have any advice please? Thankyou for your time and best wishes Caroline

Is it okay to give my budgies different kinds of millets,there are 8-9 kinds,5 of them have 8-12% fibre content.also should I give vitamins/mineral supplement ?