The female will spend up to ten days in the nesting box before producing eggs. During this time she will emerge to poo and to nibble on her mineral block - an ideal time for you to check on progress in the box and to remove egg shells or dead chicks (always with scrupulously clean hands). Otherwise, she will stay put.

The hen lays four to eight eggs, with one every two days, and each one needs incubating for 18 days (occasionally a little longer), after which they hatch. Sometimes she will only settle in for full-time incubating when the second egg has been laid. Any egg unhatched after 23 days is not going to produce a chick. An emerging chick can take several hours to break free of his shell, and this is perfectly natural, so don’t be tempted to intervene.

Any egg laid after the sixth one is in danger of having its chick trampled by older, larger siblings, which could damage the younger one's fragile body or, at the very least, prevent it from receiving food. In these circumstances you should give the younger birds to a foster mother, if possible, or hand-feed them (see Feeding baby Budgies, below).

Note: a single hen will occasionally lay an infertile egg. This is a sign that her hormones have gone through the mating season motions in the absence of a male, and is nothing to worry about. The hen will not fret or attempt to incubate the egg. Simply remove it, and that’s that. 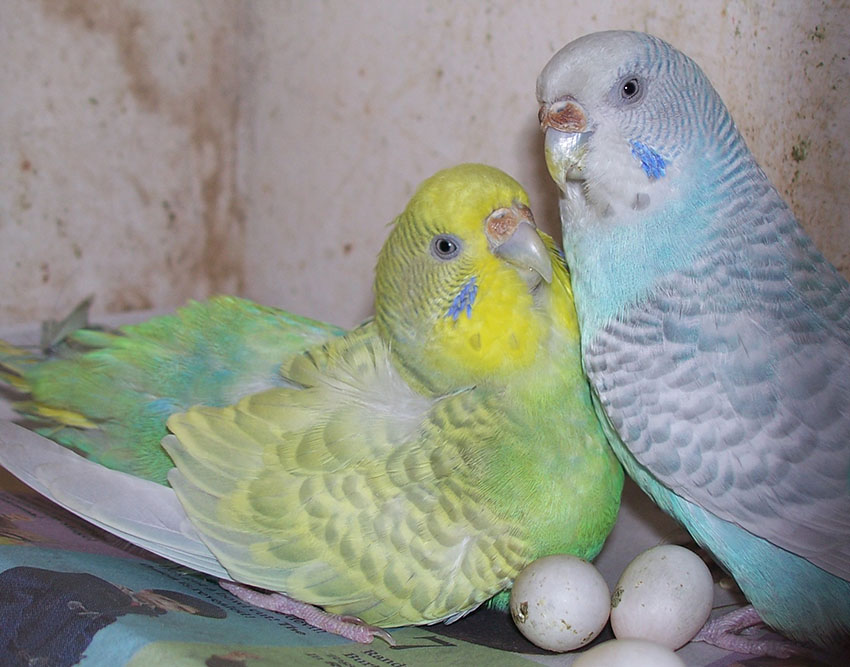 There are a few reasons why budgie eggs may not hatch. 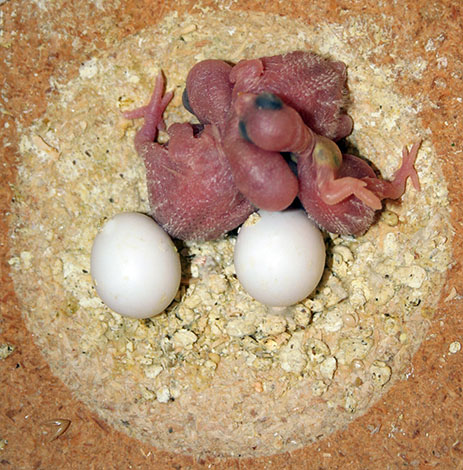 At first glance, candling looks like a typing error for ‘handling’. It is, however, a useful method for finding out if a budgie egg is viable. It should only be carried out if you have young birds, or if the egg has been pushed out of the nest by the hen. In any other circumstance it counts as unnecessary interference.

To candle an egg, you need to shine a small bright torch on it (less liable to burn your fingers than an actual candle). You can perform this investigation without moving the eggs from the egg box (when the hen is absent), as long as you are able to get a good look at the egg as you do so. Failing that, hold it between your finger and thumb, wearing gloves. The room will need to be dark for successful candling.

The torchlight will expose the interior of the egg. If there are red veins showing through, that’s a sign of a healthy egg. If it’s well developed, you’ll be able to see the outline of the bird inside. If all you can see is a shape without any red lines, the egg is a dead one.

Budgie Eggs Thrown Out of Nest

If a hen ejects an egg from the nest, it’s unlikely to be accidental. Eggs are discarded in this way if she sees them as unwanted intruders in the nest. This is sometimes down to her instinct for things not being right, in the case of an infertile or damaged egg. It may be that the egg has been handled by the budgie’s owner, and no longer smells like her own. Always wearing clean gloves when you handle the eggs will help. Better still, don’t handle the eggs at all.

A stressful cage may also provoke the hen to this drastic action. It’s her way of abandoning ship.

Sometimes another hen will turf out the eggs. There’s no malice involved - she just wants the nesting site for herself, either to lay her own eggs in or simply to snuggle down somewhere warm on a cold night.

Budgies are usually very good parents, and you will not need to intervene to help them rear their young. Hens will happily incubate another bird’s eggs, if such a thing proves necessary. She has a strong sense of territory in her nest box, but is unable to count her eggs or recognise individual ones. A loss or a gain will pass her by, and she will simply carry on brooding until the clutch has hatched.

There is no need to mark or number the eggs (common budgie keeper quirks in days gone by). At best you’ll gain nothing that a few notes or a simple spreadsheet can’t address, and at worst you’ll inspire the hen to eject the eggs from the nest.

If you find yourself in the position of having eggs that need incubating, but no female present or willing to do the job, you can try hatching them yourself. This is actually the relatively easy part - keeping the newborn chick alive is where the really tricky stuff starts.

Buying an incubator is the only viable option, unless you can somehow maintain a temperature of 36.8 C and a 65% humidity around the eggs. A decent incubator with temperature settings and a self-turning system does for egg-hatching what a breadmaker does for flour and water.

My female budgie layed 4 eggs and the male sits on it all day and doesnt lwt tye female get close to the nestbox what do i do please helo!

I have 1 female and 1 male budgie. They got flirty last December and the girl laid 6 eggs early January. After almost a month since the first egg was laid, we finally candled them. They're all infertile (it is a young pair). What should I do so that she can move on from nesting? Is removing all at once a bad idea?

Hi there. I live in Australia and it is a really hot summer this year, like, 42°C hot. I previously had budgie eggs, but they didn't hatch. Is it possible that they overheated? I currently have some eggs and I am very worried that they might overheat too.

Our budgie has laid 2 eggs so far this time and this makes the 2nd time in 2 months she has laid eggs. We have provided her with a nest but she refuses to lay her eggs in it and is laying them on the wire base of the cage. The 1st time she laid 3 eggs but after we moved them to a nest she refused to sit on them anymore. If the eggs are fertilized and hatch we don’t want them falling thru. Can you please advise what me might can do without causing her to refuse to sit on them anymore?