Average Rating:
Based on 4 Verified Reviews

We've two 14 month old Maine Coons who weigh 6.5kg each and within 5 minutes they were up and down it. They absolutely love it and it is sturdy enough that both of them can easily be on it at the same time. Wasn't as easy as we thought to put together but it's in place now and not moving! We are going to buy a larger set up for their room.

This reviewer has 2-4 Maine Coon pets

Had this a while now and keep adding extras for my 2 cats. The quality is superb and worth the price. The cats love it, whether they are sleeping, climbing, hiding or just being crazy. The hammocks are the favourites, I had to get them one each to avoid any arguments.

We bought this for our new kittens in the hope that it would save our furniture and curtains - and so far so good. The kittens absolutely love it and we love watching them on it. Fairly easy to put together though it does take time! All worth it.

We have two ‘indoor’ cats, built them a huge outdoor ‘catio’ but they hardly use it in the winter so got em this indoor jungle gym for cats! Had two normal cat trees and they liked them - but this is another level….literally. Because the poles are so so much more versatile than a standard cat tree you can have them anywhere without getting in the humans way. Just cant speak highly enough of this product everything from the help ordering to the actual online videos helping with assembly are just 10/10. Thanks rosie and the rest if the gang. Matt.
Review for: Freestyle - The Explorer Kit - 2.15m to 2.60m 2 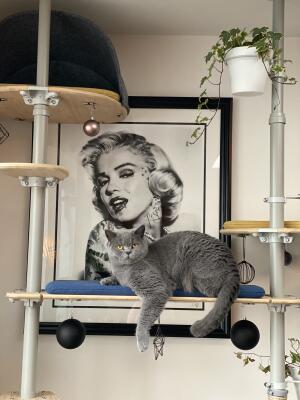 First the bad stuff...it's expensive, and it takes a few weeks to get to you. Good stuff? Loads. The price buys quality, excellent quality, everything has been well thought out at the design phase and is manufactured with high quality components and finished to a very nice level. I went for a custom 3 pole system with loads of attachments and it took me a whole day to assemble...but the effort was worth it. Only completed it yesterday, Cats are a little wit wary at the moment because it's new, but one has been up already (the greedy one, she saw me place some food at the top!) and once the younger one takes the plunge I know she'll be all over it going forward. Highly recommended if you have the space and the funds.
Review for: Freestyle - The Explorer Kit - 2.15m to 2.60m 2

I don't know who loves this more, me, the kids or the cat. We went all in with two poles, two bridges, three steps, plant-astic set-up - and the crowing glory, the platform and hammock, on the recommendation of the previous reviews. Ryshi, our 6 year old cat, is not the most athletic and a bit of an over-thinker, so we were nervous he would be nervous, but he loves being able to perch high up and look out the window. He loves the cushion pads which I think feel nice to his paws and he adores curling up in the hammock, it's his new favourite place. I especially appreciate the cat scratcher around one pole as it has freed up space previously taken up by the former cat scratching post, which had a large base and was plonked right in front of the glass door. The cat tree uses vertical space, which was previously not being used. It has transformed our main living space. It's pretty easy to put up, especially with the youtube videos, which show you each step for each component, me and my teenage daughter did it in an evening
Review for: Freestyle - The Explorer Kit - 2.15m to 2.60m 2

We have a two pole with ramp, cardboard scratcher hammock and a couple of steps. Very impressed by the high quality materials, the bamboo is really thick and the fabrics look like they’ll stay looking good for a long time. But best of all both cats actually use this tree all the time, I think I might get another hammock because they love that and it’s a bit of a squeeze for both of them so one normally gives in and gets out. Its really cool having them at the same height as you when you're standing up and i actually feel like my cats are impressed by something i've bought for them - incredible!
Review for: Freestyle - The Explorer Kit - 2.15m to 2.60m 2 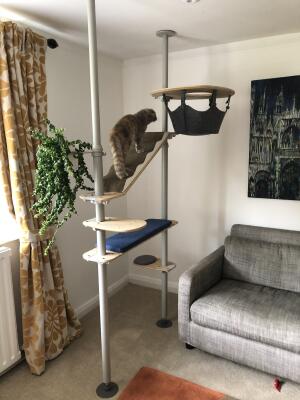