Fruit, vegetables, nuts, seeds, a little extra protein in the form of cooked meat, and a base of specially formulated parrot mix. That’s the basis of most pet parrots’ diets. But there is no single diet that suits all types of parrot. It’s not just a matter of size, either. Lories and Lorikeets feed on nectar in the wild, Hyacinth Macaws are mad for nuts, and some species thrive on a fairly carnivorous diet. 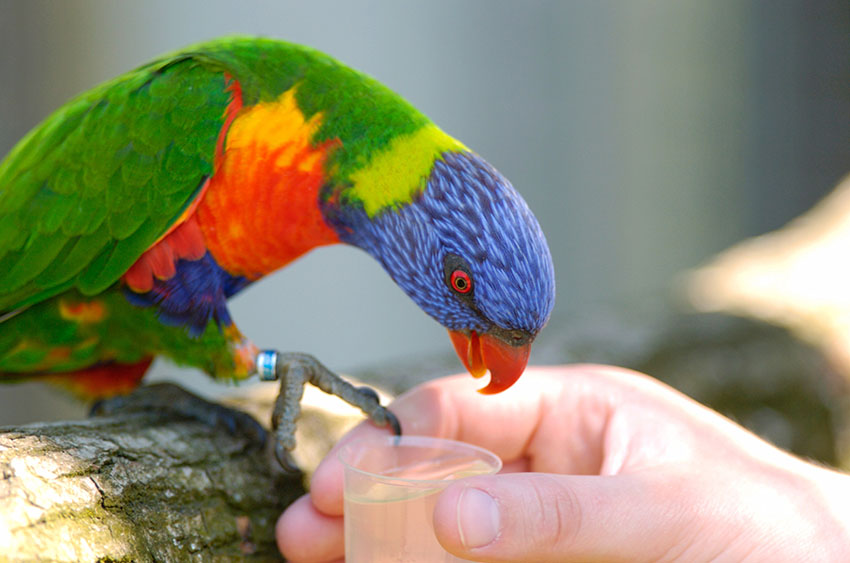 
Finding out every last detail about your specific parrot’s dietary requirements is important if you want to give the bird the best chance of a long, healthy life. Some can be fussy, or can become attached to certain foods. It’s important that all birds eat the full range of fresh, dry and formulated foods that cover all the nutritional ground they need.

The sections that follow deal with general parrot diet, based on the requirements of two of the most popular parrot species, the Cockatiel and the African Grey. Many other species will thrive on the diet described - but, again, you must check with your supplier for specific advice.

Depending on the species you keep, a formulated pellet-based parrot mix will form 40-75% of the bird’s daily diet. The brand you choose needs to be of the highest quality if your parrot is to live long and look good. The best mixes are organic, and made with ingredients fit for human consumption. Additives should be avoided (unless it’s something nutritionally essential such as calcium or vitamin K). In the wild a parrot gets all its nutrition from natural foods, and that situation can be simulated at home. All mixes will make bold claims about how good the content is, but bear in mind that parrot food is not as tightly regulated as human food. 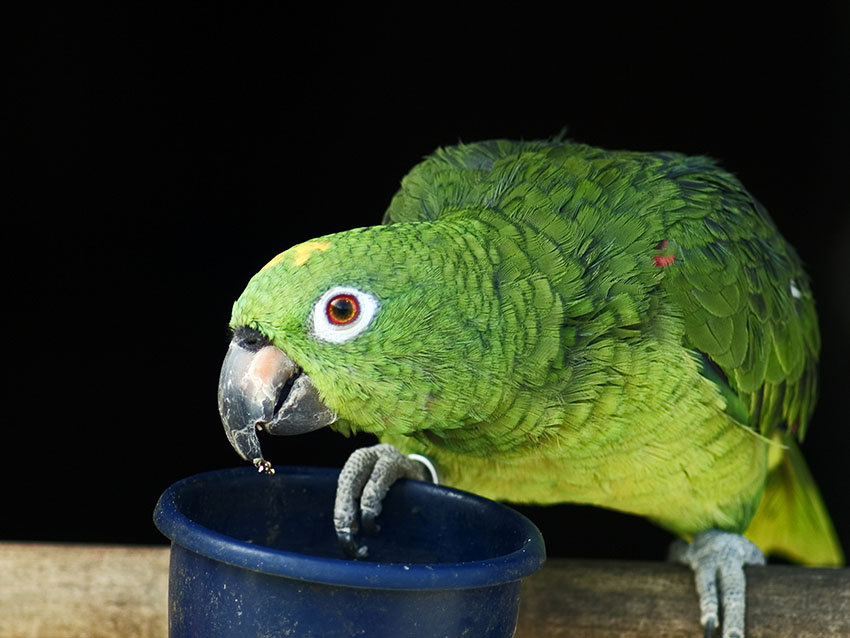 A varied diet with a basis of pellets suits many parrots, including this Yellow-crowned Amazon


Most parrots will take to a pellet mix readily, but some are fussier than others. It is a matter of presenting the food, and watching to see how your pet reacts to it. Manufacturers can’t sell directly to parrots, so they’re selling to you – that’s what all the colour and novelty shapes are about. The final judge, however, has to be the bird.

Some pellet mixes are ‘preserved’, giving them a longer shelf life. The secret ingredient is an antioxidant that stops everything from rotting. In theory this is acceptable, as long as the contents are of a sufficiently high quality. It’s always a good idea to ask the breeder you bought the bird from, or an avian vet, for advice, if you’re in any doubt.

One glance at a parrot's beak will tell you that it is primarily a seed and nut eater. Having said that, some parrots acquire a taste for live food; but others fly to the other side of the cage to avoid it.

Parrots are not very omnivorous in the wild (with the exception of New Zealand's Kea, which is not available in the pet trade), and meat does not have to be included in their diet. Some owners offer it as a treat, but it is certainly not necessary, and should only be given occasionally, and in small amounts (a few shreds on a bone, for example). 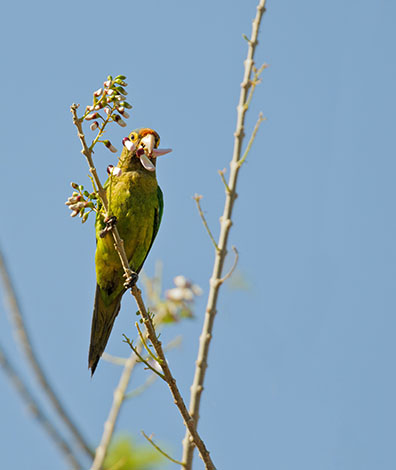 Orange-Fronted Conures will take the occasional bite of live food


If your birds are kept outside, they may occasionally catch and eat insects or worms. This is nothing to worry about, but it doesn’t mean you have to start including them regularly in the birds’ diet.

Sometimes called transition foods, this is something you might want to investigate if you are hand-rearing chicks. Otherwise, the parent birds will do the job without you having to worry about the sourcing and preparation. 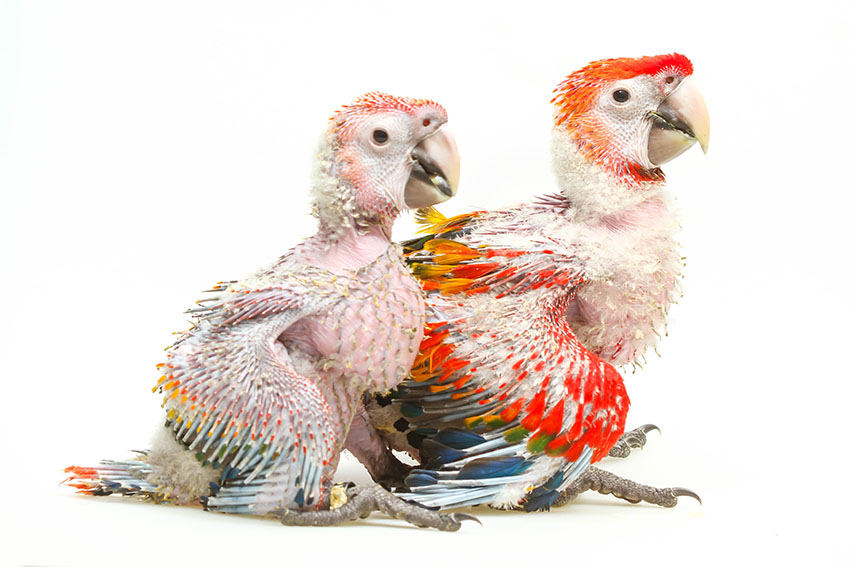 
Parrot chicks feed on regurgitated food from their parents in the early days, but soon begin to supplement this with morsels pecked from a chunk of fruit or vegetable, grasped in the parent bird’s beak or claws. If simulating this transition feeding, carrot, celery, fennel or sweet potato sticks, or a few broad beans tied tightly together, do the job nicely. The aim is to teach the chick that there is more to life than a soup of mashed up seed and veg, and they will soon be ready to feed from a standard parrot feeding station like the adult birds.

My African Grey removes the seed mix from his bowl, not eating it, but shooting it onto the tray of his cage. This is a new tendency and I am not sure how to deal with this new behaviour. His food consists of black and white seed and peanuts. He does get treats, but not regularly. Other than this new behaviour, he is healthy and active.