How To Read The Frames One of the great advantages of the beehaus is that you have space to move the frames apart without having to first take one out. This is something that you will appreciate if you have ever tried extracting the first frame in a traditional hive, where the frames are packed in with no room to move sideways.


Lifting Out A Frame

Take your time and consider the weight of the frame as you lift it. It's interesting to note the different weight of frames containing empty cells, those with plenty of honey, and pollen stores and those covered with brood. Lift with a straight continuous motion to avoid crushing bees on the sides or rolling them over the bees on the frame next door as this also annoys them (although not as much as being crushed).

Note: The frame can be completely rotated without
it ever becoming horizontal.


Identifying Parts Of The Comb

There are six sections of a frame which are: capped honey stores; nectar; pollen; brood; queen cells; and empty cells. These are easy to identify, all are important and their quantity and distribution need to be noted.

There should be a reserve of capped honey at the very top of the frame, this often extends around the corners. If there isn't, then the bees are running extremely low on food reserves and you will need to feed them. This can happen at any time of year, even in summer if the bees haven't been able to fly for a week because of bad weather.

In the rows of cells immediately underneath the capped honey, there should be stores of nectar. This is a snack food for bees, the equivalent of having a bowl of nuts on your desk, which you can dip into as you work. The bees consume this and feed it to the larvae.

Next will be pollen, this may not be so clearly defined but you should see cells packed with pollen, often different shades ranging from bright orange and red to almost black. Pollen is the protein, which bees eat, if there is none it would probably coincide with a prolonged period of bad weather.

A good brood patch is circular with a high density of cells containing either eggs, larvae or sealed brood, depending on how long ago the queen was active on that frame. If the cells containing brood are sporadic, (i.e. there are a lot of empty cells) it is a sign that either the queen is failing or the bees have ejected diseased larvae. 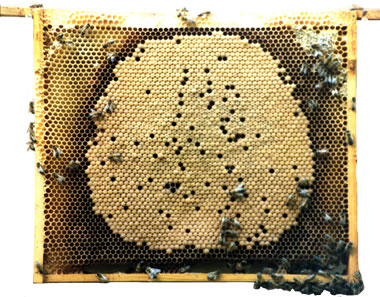 The cell caps should be flat for female bees and raised for male (drone) bees. If the caps are sunken there could be a problem.

If you discover a queen cell (which suggests that the colony is making a new queen - see picture on top right) you will need to decide whether to leave it or whether to remove it. A colony with a strong queen, plenty of space and a secure home are unlikely to be thinking of swarming.

During the day many of the bees are out foraging but at night they all cluster in the hive. If there are no empty cells at the very bottom of the frames then the message will spread that a new home is needed and the colony is in danger of swarming.

From spring to summer the number of active frames in the hive will increase as the colony expands but the make up of each frame will stay the same. This article put the whole picture in perspective for me, thanks so much ???? now I can inspect my frame and know WHERE to look for every thing ????