Keeping Finches With Other Pets

As mentioned in the sections above, pet finches are able to live in mixed groups, and will usually be happy with larger birds such as parrots in the vicinity, as long as these are not allowed to perch too close to, or on top of, the finch cage. 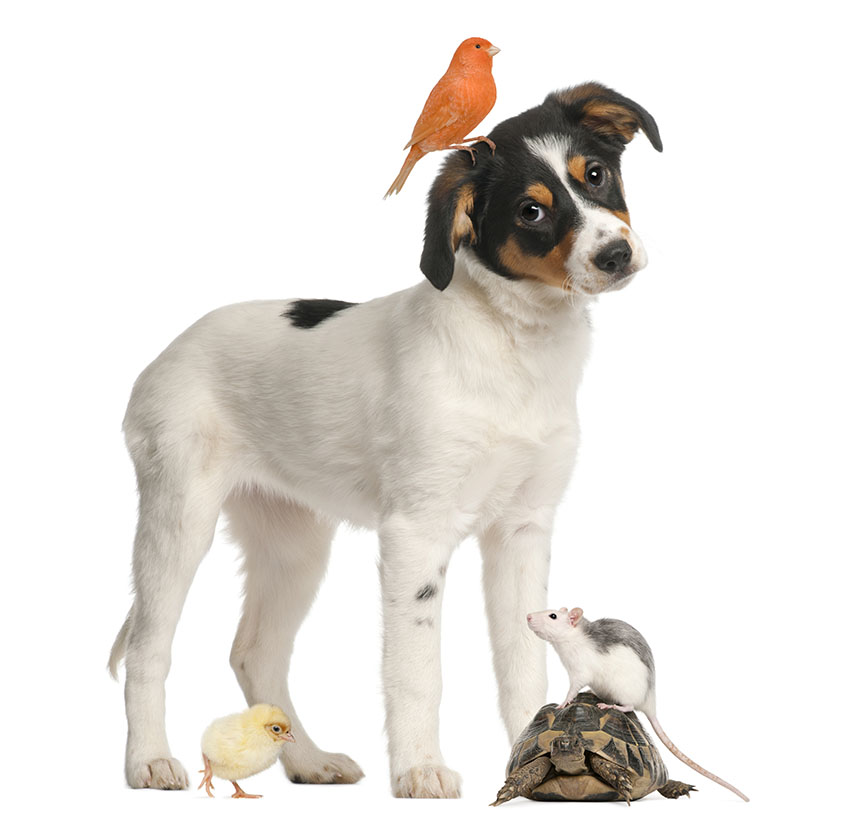 Friendship between finches and other pets is never automatic


Placid pets such as rabbits, guinea pigs, hamsters and chickens will not put a strain on your finches’ nerves. In the same way as an outdoor pet will often ignore wild birds, your indoor mammals and birds will usually ignore each other. If your pet Canary is allowed to fly freely in the room, however, it’s best to keep an eye on the animals, on the off-chance that a territorial male may take offence at all the flapping around.

Dogs have a natural predator-cum-stick-chaser’s interest in birds, and you will need to restrain them when the pets are first introduced. A well-trained hound will soon realise that the cage and its contents are not to be played with, jumped at or barked at, no matter how noisy or energetic the birds are being. The key is to minimise anxiety for the birds while making sure the dog is able to check out the cage with his nose.

Make sure you have the dog under control, and allow him to have a good sniff at everything. Let him watch the birds moving around. If he begins to bark or knock the cage in any way, calm him down and make it clear that he’s welcome to watch and sniff, but not to play with the cage or bark at it. 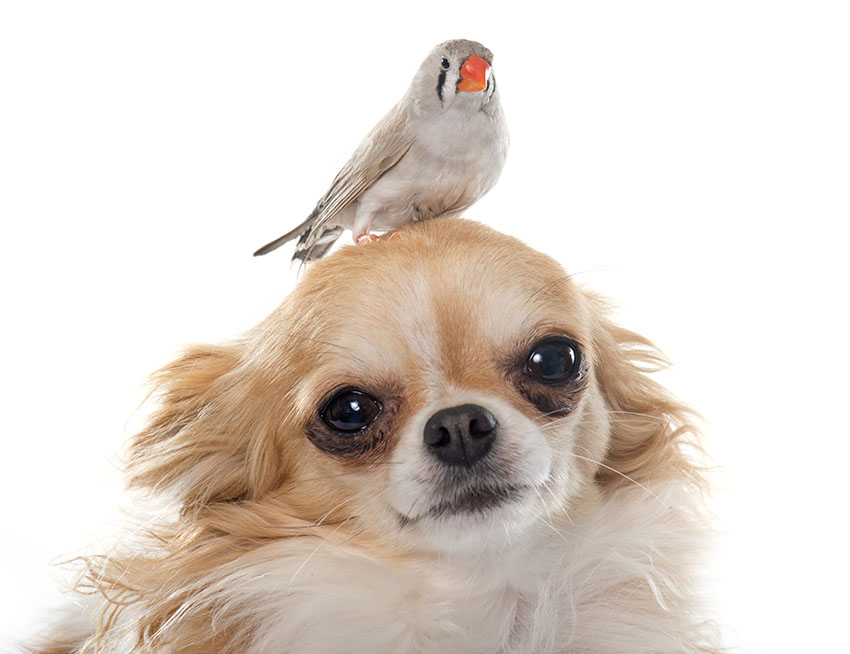 Finches and dogs - the relationship is not as easy as this image suggests!


The birds will remain a novelty for a week or so, and then most dogs will lose interest, and barely raise their heads to acknowledge any twittering or flapping. The point at which this disinterest takes over will depend on the breed of dog, but most well-trained ones soon get the message that the cage is something to ignore.

The finches come to ignore the dog completely as long as there are bars between them. The only time a problem will occur is if the dog knocks the cage or barks loudly in the immediate vicinity.

As numerous finch-on-the-head-of-dog photos suggest, it is possible to take the passive bird/dog relationship further by allowing the animals to interact when the Canary or Zebra finch is outside the cage (and we’re assuming here that, of all the pet finches, it’s likely to be these two that will be allowed free flight). But the dog’s ceasefire won’t happen automatically, even if he is indifferent to the presence of the cage. A free-flying bird is a different target altogether, and most dogs will instinctively chase and bite.

Many breeds are unable to learn that the bird is anything other than prey. Jack Russells and other terriers, for example, have been bred to find and kill small animals. You can’t expect them to ignore hundreds of years of selective breeding just because you happen to have brought a finch home. Puppies of all breeds should be kept away from the birds too.

If your dog is an adult, non-hunting breed, extremely well trained and passive, you’ll be able to perch the pet finch on or near him without reaction, in the same way as you can (with a very well-trained dog) put food close to his nose without him eating it, until you give the word of command. If he’s not that well trained, don’t let the animals meet without intervening cage bars. And never allow your dog to lick the finch, as the bird can catch diseases from the saliva.

Think of the chalkiest type of chalk and the cheesiest type of cheese, and you have a good symbol for the natural harmony between bird and feline. Cats eat birds, and it’s an uphill struggle to go against that fundamental instinct. Given that most finches will spend their lives in cages and aviaries, it’s not a relationship you need to work on. Keep the cat away from the birds, and discourage her from lunging at them.

Having said that, some cat owners do allow their pets to intermingle, and a friendship of sorts can indeed be achieved, sometimes. It will depend on the nature of your cat. Any feline who spends most of her time outdoors controlling the rodent and garden bird population and runs a mile at the sight of a stranger in the house will never form a friendly relationship with a pet finch. Even for a friendly cat who likes to spend her day curled up in your lap, the cat-bird relationship will be an uphill struggle. 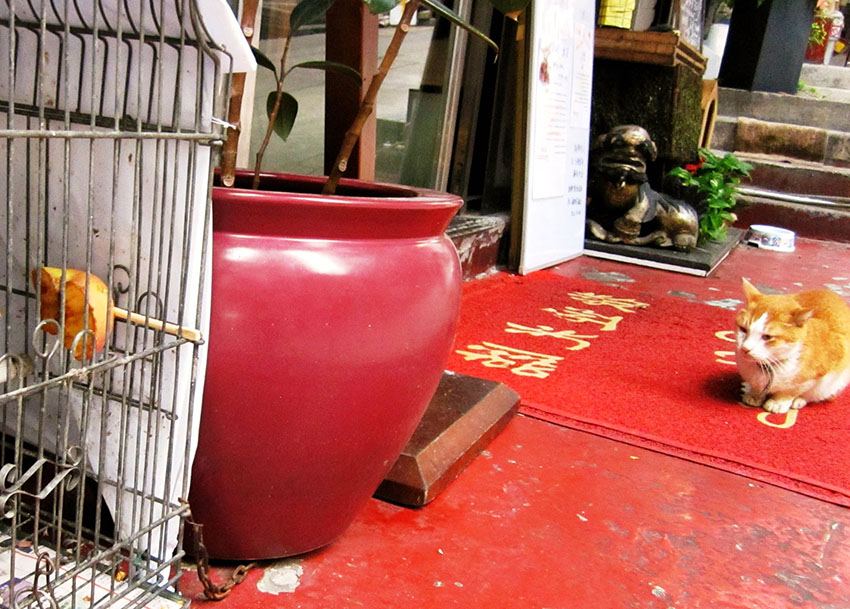 Cat and finch - the bars are there for a reason!


If you’re confident that your laid-back cat isn’t going to enter killer mode – and only you, as the owner, can judge – introduce your Canary by holding it gently in a manner that prevents it flying away (see the Holding a Pet Bird section of this guide). Watch out for any signs that your cat might lash out or pounce, and reprimand her with a firm “No!”, or whatever other word of dissuasion you use. You don’t want to shriek at her, though, as that will panic the bird. Allow the cat to watch and sniff the Canary. If it’s in your hand , she’ll associate it with you, and will come to treat it with the respect and affection she shows you. The theory is that the cat will then recognise the bird when it’s perched on your finger or free-flying, and will leave it alone.

You’re not entirely in control of these introductory sessions, however. A flapping bird might suddenly bring out the cat’s hunting instincts, so you need to be vigilant. Some cats ‘get it’ straight away, others never will. The risk factor will never disappear completely.

The best advice by far is to prevent the cat and bird from interacting. They don’t have to form relationships, and you can simply bar the cat from the room during free-flying sessions. But someone opening a door unexpectedly while the Canary is in the room could let other pets sneak in, so you have to make sure everyone knows the bird is not in his cage, and that closed doors must remain closed.

As with puppies, never let kittens come near a pet finch. Simple as that.