Feather loss could be due to one of several different things, including moulting, parasites or Psittacine Beak and Feather Disease (all of which are dealt with elsewhere in this guide). Other possible causes are listed below. 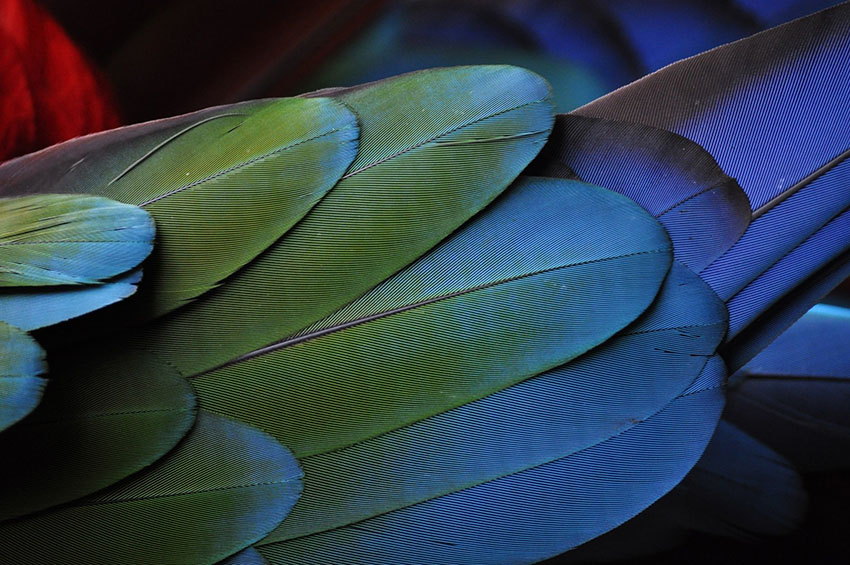 A parrot can sometimes begin self-plucking and self-pecking as a result of a skin irritant. This might be food or some chemical in the environment (cleaners, household products, etc). Isolating the irritant can be tricky, and it is worth turning to the vet for expert advice.

This can be brought on by a number of different factors – self-plucking, plucking by another bird, hormonal imbalance, mineral deficiency, Psittacine Beak and Feather Disease (PBFD) (see Parrot Diseases section), feather mites or ringworm (see Parrot Parasites section), or genetics. Cockatiels suffer from baldness more than other species, and genetics seems to play a large part in that fact.

When a parrot is growing new feathers during the moulting season, or when young birds are producing their adult plumage, feather bleeding can occur. A new ‘pin’ feather contains blood vessels, without which the full feather would not be able to grow. If these are damaged during the early days, they will bleed like any other wound. 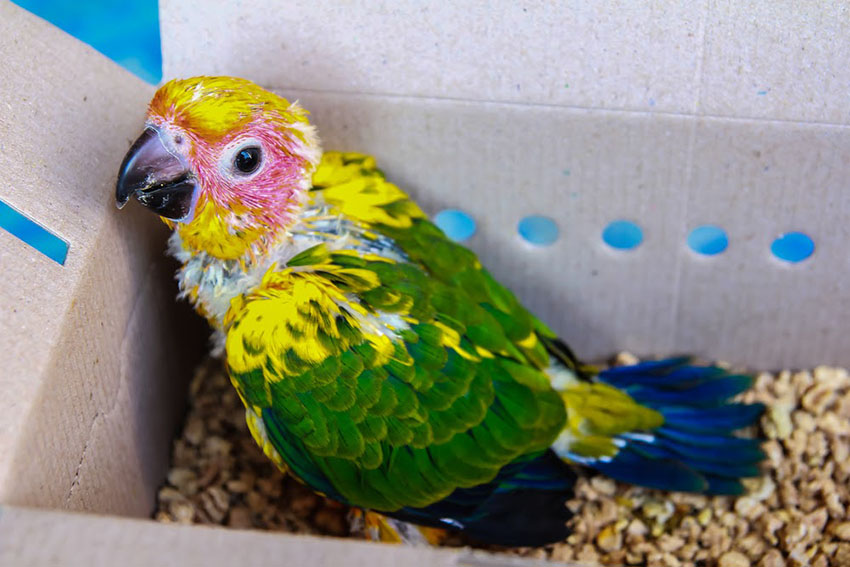 This Sun Conure chick is growing its first set of feathers


A patch of blood on an adult bird’s coat is most likely to be one of these pin feathers. In extreme situations, the damage can result in the loss of so much blood that a small parrot like a budgie can weaken, and even die. The larger pin feathers – those associated with primary wing and tail feathers – bleed the most if damaged.

Once spotted, the bleeding must be addressed at once. The parrot must be caught, and the broken end of the feather must be held tightly for ten minutes. (Note: the pressure should be exerted on the feather itself, not the bird’s body – squeezing the budgie can cause suffocation.) Once the bleeding has stopped, arrange a trip to the vet to have the broken pin feather removed.

Pin feathers above the cere and nostrils can easily break, but the bleeding involved here is minimal and soon stops.

Feather colour can sometimes change as a result of damaged follicles, medication, or too much vitamin A supplement. The colour change is temporary, and will be remedied at the next moult.

Cysts occur when a feather fails to break through the skin. It will continue to grow beneath the surface, producing a lump on the parrot’s skin. The primary wing feathers are the most commonly affected ones. The cause is uncertain, but malnutrition, genetics and infection of a follicle have all been implicated. Cysts won't disappear without surgical intervention. The most commonly affected parrots are macaws and budgies. 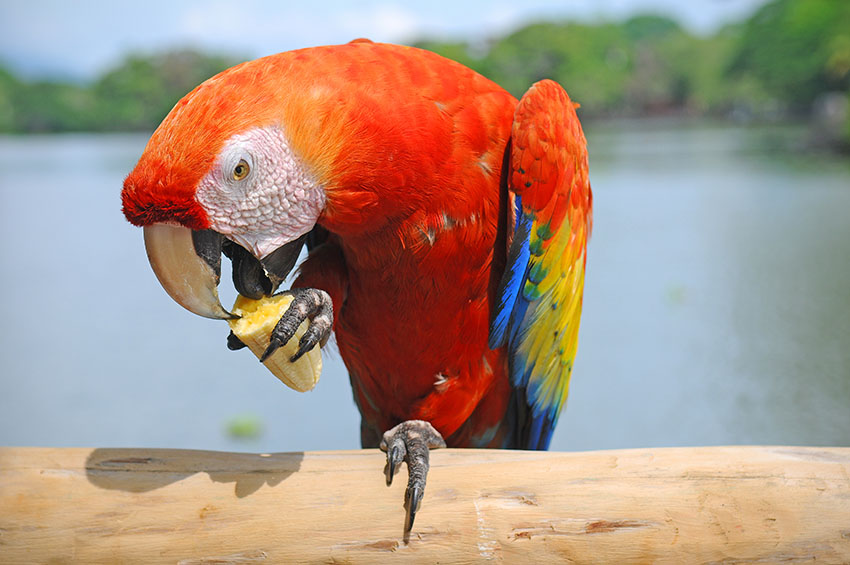 If parrots like this Scarlet Macaw overeat, they are prone to fat tumours

These are made from fat cells beneath the skin, usually occurring in overweight birds, and most commonly in sulphur crested cockatoos and budgerigars. Poor diet and obesity is the usual cause, although thyroid gland conditions and genetics can also play a part. Large tumours, although usually benign, are unsightly and begin to restrict movement as they grow. They can also become infected. Affected birds will peck at themselves, resulting in feather loss, bleeding and infection. An improved diet (fewer oily seeds) and additional exercise will go a long way to solving the problem. Iodine supplements in the drinking water are often prescribed by vets too. In severe cases, surgery may be needed.

This is usually a sign of mineral deficiency. Other symptoms include itchy skin and feather loss. Making sure your birds all have access to a mineral block will usually cure the problem, or a vet may recommend adding supplements to the parrots’ water.

If a parrot starts plucking its own feathers, there’s an underlying health problem. Unfortunately, it’s not obvious which of the many possible ailments is to blame. It could be parasites, an allergy, low air humidity, lack of fresh air, stress, boredom, mating hormones, liver disease, cancer, bacterial or fungal infection, malnutrition, heavy metal poisoning, or simply a bad habit. 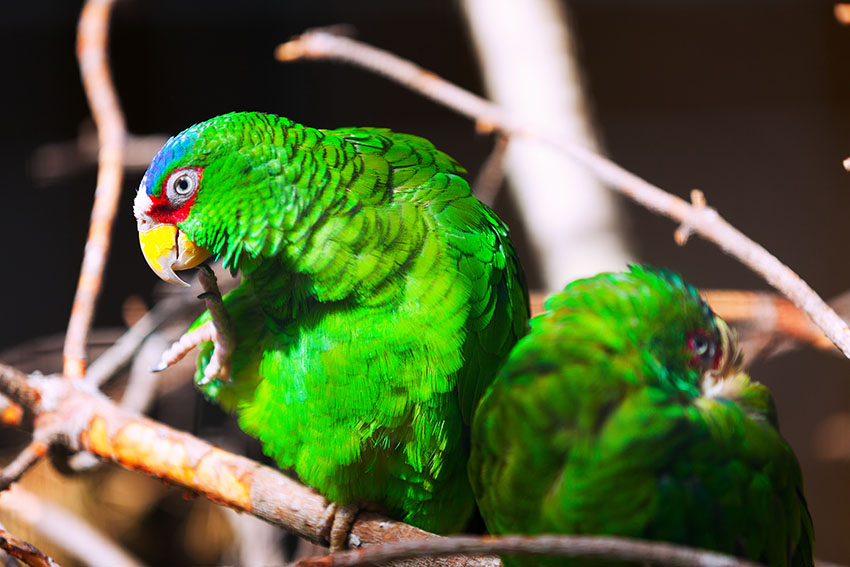 
A trip to the vet’s is necessary to see if the underlying problem can be diagnosed, and if it turns out to be an environmental problem rather than disease, there are a few things you can do to get to the bottom of the plucking mystery: 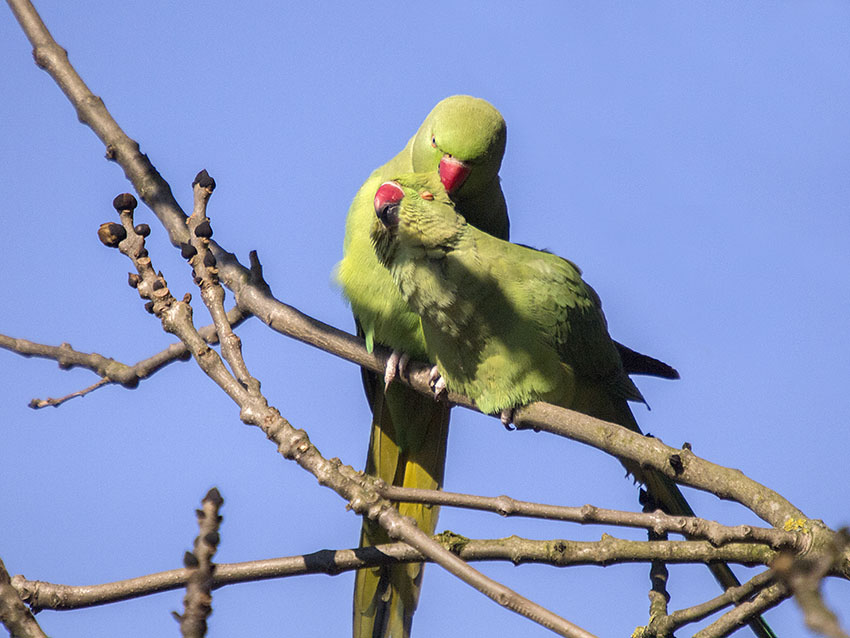 This is a variation on the plucking problem. A bird who is plucked by his cage mates will become very stressed, and can even die as a result. Isolating the perpetrator is the best short-term solution; but you will also have to assess the problem and see if you can resolve it in the long term. The guilty bird may have been frustrated – these issues are often sex-related. Providing a nest-box or a choice of potential mates may divert the bird’s frustrations away from plucking. Making sure there is more than one feeding station might help, too.

This vague category is included to alert owners to the possibility of a parrot’s diet being deficient in the essential amino acid methionine. Other symptoms of this deficiency include a flaking beak. Methionine can be found in many parrot foods, including Brazil nuts, sesame seeds, pumpkin seeds, sunflower seeds, eggs, and spinach. Supplements are an option, too. The feathers and beak can take up to a year to recover their former glory.

(Note: poor feather condition is associated with many other parrot ailments too) 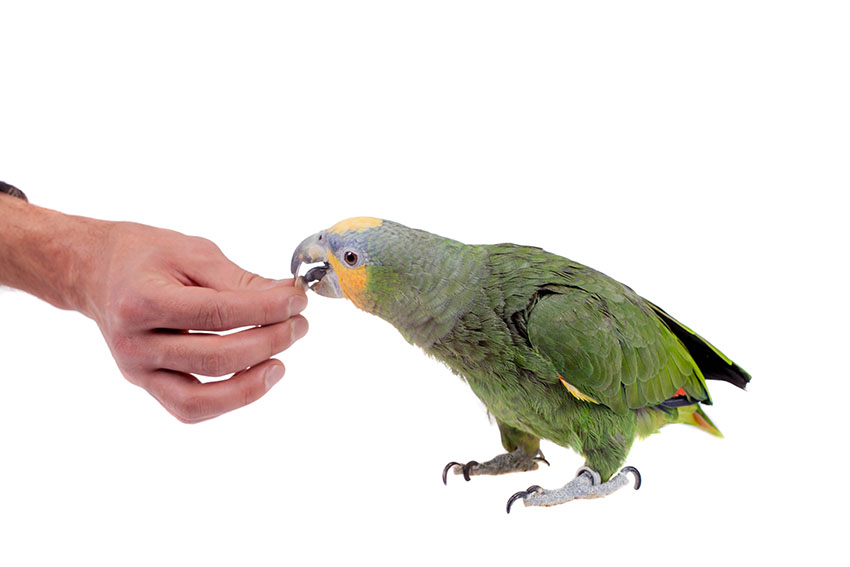 This is where multiple feather shafts grow from a single follicle. It sometimes causes inflammation of the follicle and surrounding skin, and often causes itchiness or bleeding. In some birds the condition appears to cause no problems. It most commonly affects the tail and back of the neck. This condition is thought to be brought about by a virus, although it is not a contagious one. Often a single bird in an aviary will be affected, and stress seems to be the main cause of a flare-up of the problem.

Please please help my Alexandrine Parrot!! He has been with us several years, but off late I noticed he has lost a patch of feathers under his wing. Now I noticed feathers missing under the wing on his body as well. He is very active, not lost his appetite or anything and it doesn’t seem to be affecting him in anyway.

My Military Macaw has always had dry skin. It is now over 20 old and has started to develop what appears to be white tipped shafts sticking out of it primary feather cover. Does anyone know what it could be? I am getting concerned.

I’m just here because I found one albino feather on my green wing macaw lol. It kind of has color enough to tel it’s a green wing feather but not only is it in the wrong spot but it’s mostly without pigment.

I have a 9 month old afican grey he seems very happy and vocal but he keeps pulling his white fluffy feathers out is this normal as I am new to the parrot thing and is a bit worried. I know they molt at this time of year any advice would be much appreciated thank you.