Lots of what your pet birds do will be self-explanatory – things like feeding, flying, bickering, bathing, and climbing. But there are other types of movement and body language that require a little homework on your part if you are to fully understand what your parrot is ‘saying’ with his body. 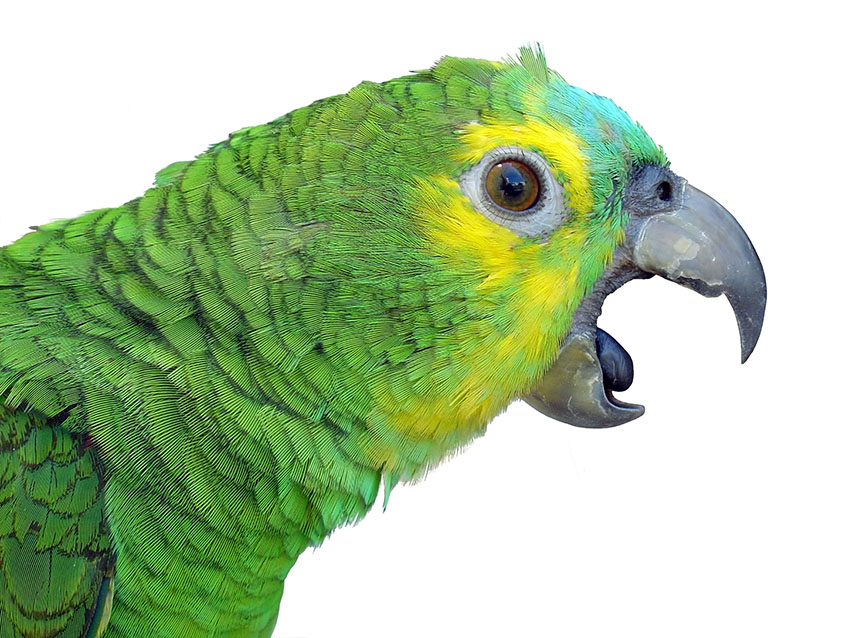 This is always an unwelcome behaviour, and is a sign of aggression, over-defensiveness or fear. You can see most bites coming – the bird will crouch and open his beak prior to the lunge. Getting the parrot used to your presence will help to defuse the behaviour. If it’s taking place in an aviary, you may have an overcrowding problem. If all else fails, a biter will have to be isolated from the other birds until he shows signs of calming down.

Parrots chew as busily and contentedly as mice. It’s important to indulge this natural instinct with chewing toys made from appropriate (i.e. non-toxic) materials such as wood or egg boxes. 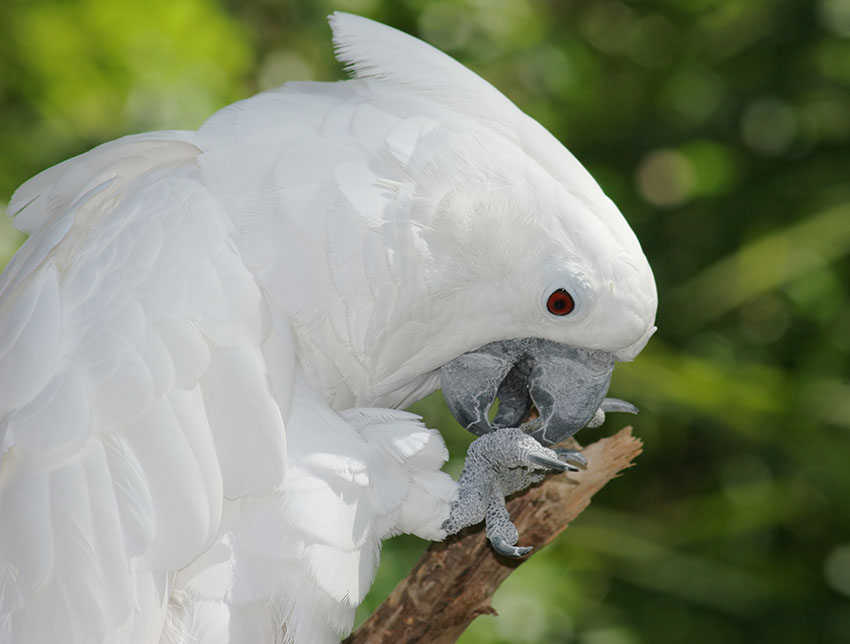 White Cockatoo - this family of parrots all sport crests

Cockatiels and Cockatoos use their crests to express themselves. When relaxed and happy, the bird will have its crest flat or ever-so-slightly raised. If the bird is crouching and hissing, however, this means he is angry and afraid. A raised crest indicates excitement. This is usually a sign that the parrot is pleased to see you (or the food you are carrying!). This is not to be confused with a crest that’s fully-raised and stays in that position. This is a sign of fear, anger or some other over-stimulated state of mind. Beware the angry peck! 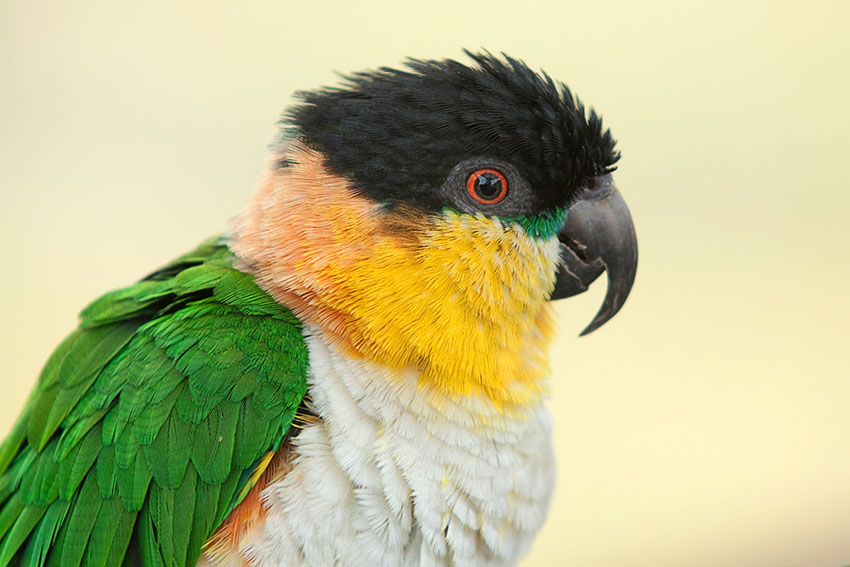 This is part of the preening or grooming process. It shakes off the dust and gives the parrots’ beaks or toes access to the roots of the feathers where the dirt accumulates. It also acts like the shaking of a quilt, allowing the feathers to settle back neatly into their correct positions. A quick shivering ruffle is sometimes performed to relieve tension after a spell of bickering or chasing. Constantly fluffed-up feathers may mean the parrot is too cold, or ill. Any doubts about the bird’s health should be addressed by taking a trip to the vet.

This is a sign of a happy bird. Not all parrots do it, but many seem to enjoy the sensation, and it’s nothing to worry about. 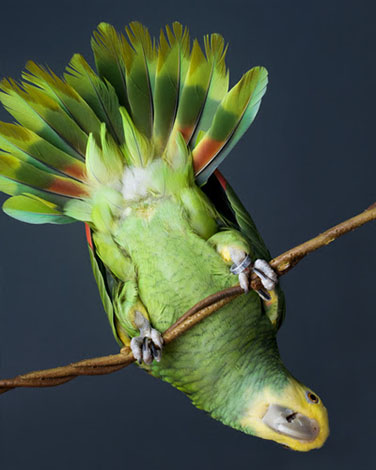 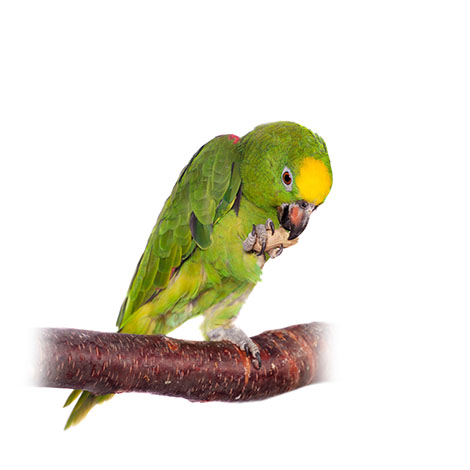 Yellow-Crowned Amazon - parrot's feet can be thought of as hands

The saying “sick as a parrot” stems from the birds’ eagerness for regurgitation (i.e. ejecting pre-swallowed food via the beak). Parrots feed their young in this way, and the male feeds his nesting partner similarly as part of the bonding process. If your pet does this to you, with dilated pupils (eye-pinning), head-bobbing and neck-stretching, it is a sign of affection, but not one you will be keen to encourage. Make no fuss, and don’t speak to the bird when it behaves this way. It will soon get the message that this particular type of affection doesn’t work with human friends.

Scratching the head and neck area is just part of the preening process, tackling those places the beak can’t reach. If the parrot scratches with its claws on the cage bottom, it is foraging, chicken-like. Not all species do this, but it’s a common pastime for the African Greys. 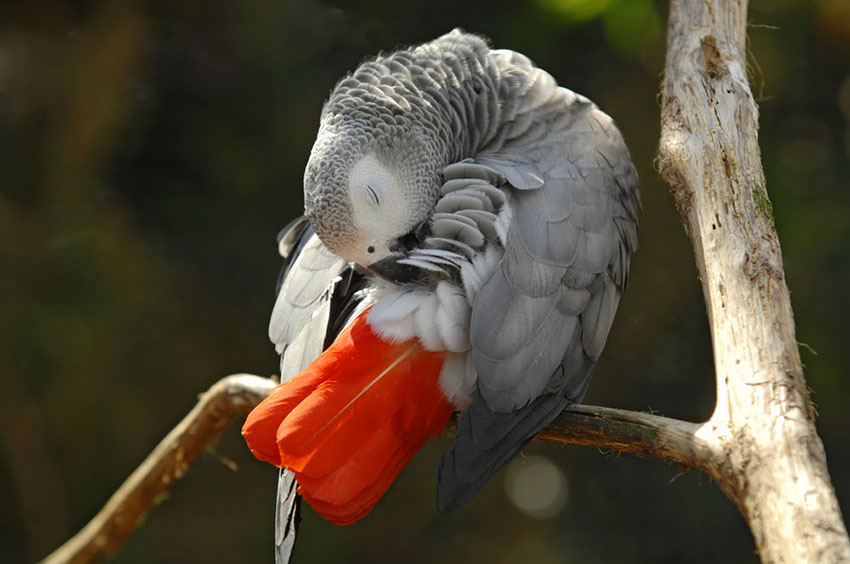 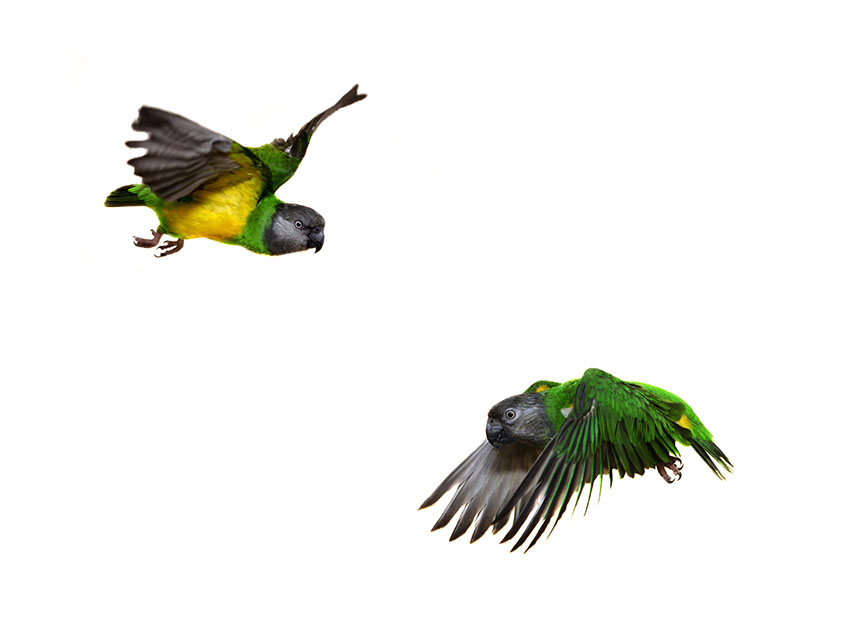 Wing-clipping is not compulsory, but many parrot keepers recommend it. The purpose is not to prevent flight, but to slow it down. If correctly clipped, the parrot will be able to fly, but will not have much ‘lift’. In confrontational situations, this will (for example) prevent an angry male from pursuing and injuring an unwilling female. It also makes recapturing escaped birds a little easier. 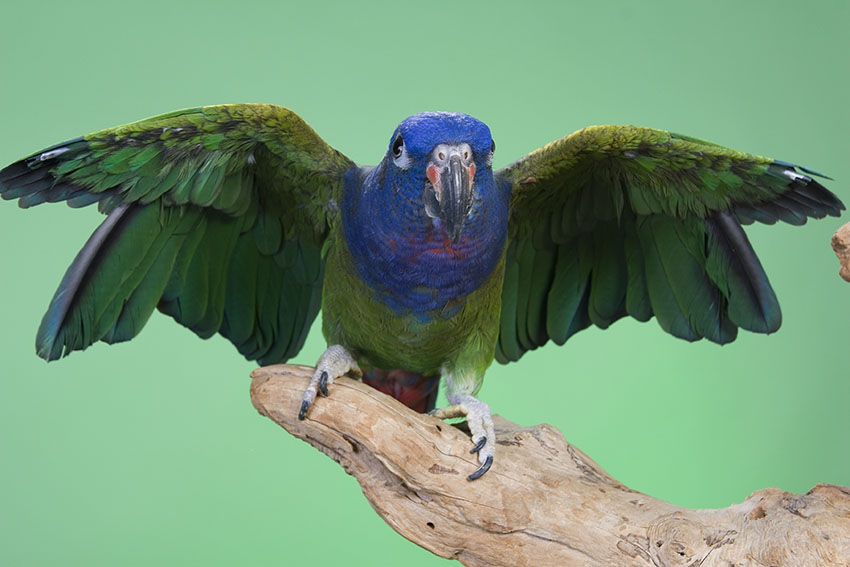 This Blue-Headed Parrot has had its primary wing feathers clipped


The clipping must be performed properly, by someone who knows what they’re doing. Poorly clipped wings can make the parrot lose its balance, or may cause bleeding or injury. A badly clipped feather may also become a source of irritation to the bird, resulting in self-pecking and plucking.

Wings should never be clipped before the parrot has learned how to fly, otherwise the bird will not master the balance required for takeoff and landing.

Hi,i got a Amazon parrots and sometime she got wild and bites her feet and everything she can bites aswell her cage.don't now what make her so wild,but she don't bites my hand.what seem to be the problems.please guide me ?

I have a 20 year old umbrella cockatoo. Other than occasional bouts of feather plucking we haven't had any sustained behavior problems. I do have a question about her habit of sustained stoccato pecking of my husband's knee... Like woodpecker. It doesn't hurt but after 10 or 15 minutes it seems excessive. She only does it with him. She's primarily my bird (she always wants to hibernate down my shirt and has laid an egg there on occasion) but also goes to him and has never been aggressive to him. What does the pecking mean.

I have a 10 year old parrot recently she has become very sluggish.what to do. Can you suggest me a homoeopathic remedy

To Sonia and Bob, depending on the parrot's age and past experiences, it can take a year or more for the bird to accept you. Start by just spending time beside the cage. Move slowly around the bird--quick movements can startle them. Offer favorite foods by hand. Be prepared to wait a long time before the bird approaches to take the food, usually something like a sunflower seed that you won't feed as part of their regular diet. The bird will learn to associate your approach with offers of this food. Only after all this should the training to step onto your hand begin. There are many good books on this part of the process. The main point is that you need to be patient. If the bird has been caught in the wild (which none should be these days!) it may never become tame enough to be a friend and really belongs with other parrots.