Parrot tricks are something that both the bird and the owner derive great pleasure from. But it is important to note that it isn’t just about entertainment. A trained parrot views his ‘performance’ as social interaction, and this will assist both with his tameness and his general well being. If you have more than one bird and keep them in an aviary or birdhouse, this is less of an issue. They will be more ‘wild’ and the only ‘trick’ they need to learn is not biting humans! A single parrot in a cage, however, needs you as his closest friend. The tricks and games you teach him will be part of the cement of that friendship. 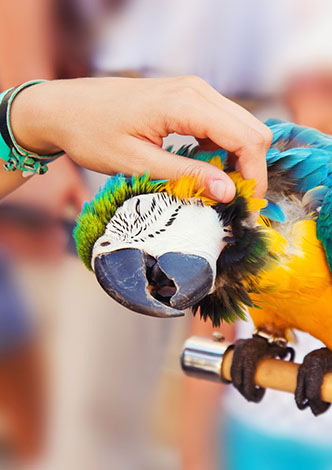 The key to tricks is having a good relationship with a tame bird, like this Blue-and-Gold Macaw


The best place to teach tricks is a neutral spot, away from the parrot’s cage and away from distractions. Have a perch standing by – a T-stand or similar. This will be the starting point for all the tricks – the parrot on his perch, and you close by. A supply of treats will be needed too.

Keep the sessions short, especially in the early days. Watch your bird carefully, and as soon as he stops enjoying the interaction, call a halt.

This is a good first trick to teach your pet. It relies on the bird knowing how to ‘step-up’ (see the Parrot Training Methods section of this guide).

When the parrot is sitting still on the perch, say “wave!” and offer your finger for a step-up. He will lift a foot to take the step - don’t let him step onto the finger, but move it slowly away. The parrot’s foot will remain in the air for a moment – this is your cue to tell him how clever he is and offer a treat.

Repeat the routine as many times as your parrot will allow before boredom sets in. Eventually, after a few sessions, the prompt word “wave!” will make the parrot lift his foot. Some birds get it very quickly, others take a little longer. Patience, as ever, is key.

With your bird happily settled on his perch and ready for some interaction, hold a treat at eye-level, but well out of reach. Move the treat slowly around the bird, using the words “turn around!” to establish a connection between the action and the command. The parrot will reach out with his beak as your hand moves around him, and he will have to turn his whole body to keep the treat within sight. When first teaching the trick, stop at 180 degrees, and let him have his reward. When he’s done this a few times, complete the 360 degrees. After several run-throughs, your parrot will turn around on command, knowing that a treat awaits. 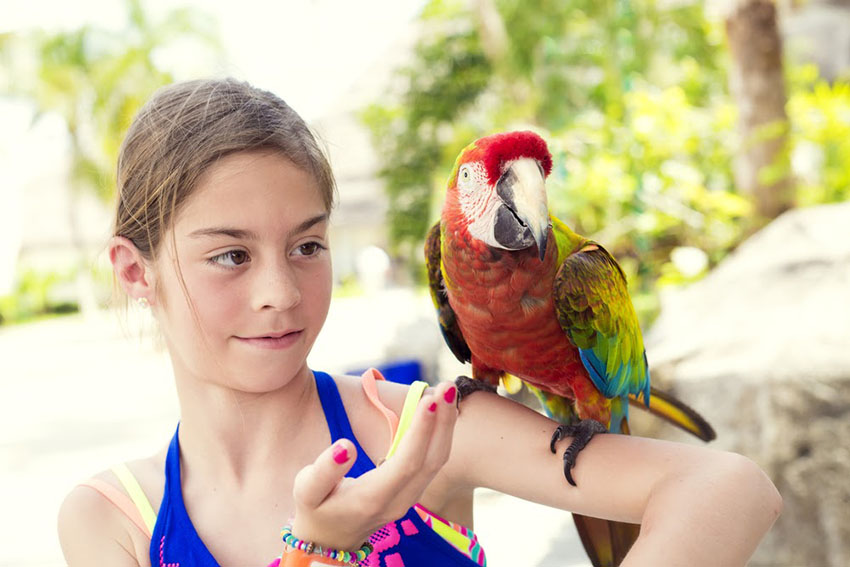 This is a variant on Turn Around, in which the treat is moved from eye-level down to perch level, with the words “Take a bow!” becoming the cue.

This relies on your bird knowing how to ‘step up’ from one perch to another. With the parrot standing on a flat surface, offer your finger as a perch, on his left or right side (rather than head-on). He will reach out with one foot and grip your finger. The trick is to move your finger up and over him so that he ends up on his back. He will be slightly put out the first few times you do this, but offering treats and praise will soon make him realise what’s required. As you carry out the training, use a chosen phrase, such as “play dead” or “lie down”. Some people use a pretend gun sound, but others think that’s in bad taste! Over time, the command will elicit the response.

This is a great bonding game, and is worth the time it takes for your pet to learn it. When the training is completed, the parrot will respond to “fetch!” by picking up an object, bringing it to you and dropping it in your hand. There are three stages.

Choose an object suitable for your parrot’s beak size, such as a bright button. Hold it out to your bird until he takes it in his beak. When he does so, say “fetch”. Let him play with the object; and as soon as he drops it say “drop it!” and reward him with a treat. Now put the button on the floor and let him pick it up himself, saying “fetch” when he does so, and “drop it” when he drops it.

Next, put your hand, palm up, close to the parrot, and try to catch the object when it drops. He will soon come to associate the dropping of the item into your hand with the treat that follows. Alternatively, you can catch it in a bowl, which will then become the parrot’s target for dropping.

You now need to introduce distance into the game. Toss the object a metre or so away from the bird, and as soon as you see him moving towards it say “fetch”. By now he will have realised that dropping it in your hand (or in the bowl) is a sure way to get a treat, and will scuttle back and deposit it in your general vicinity. 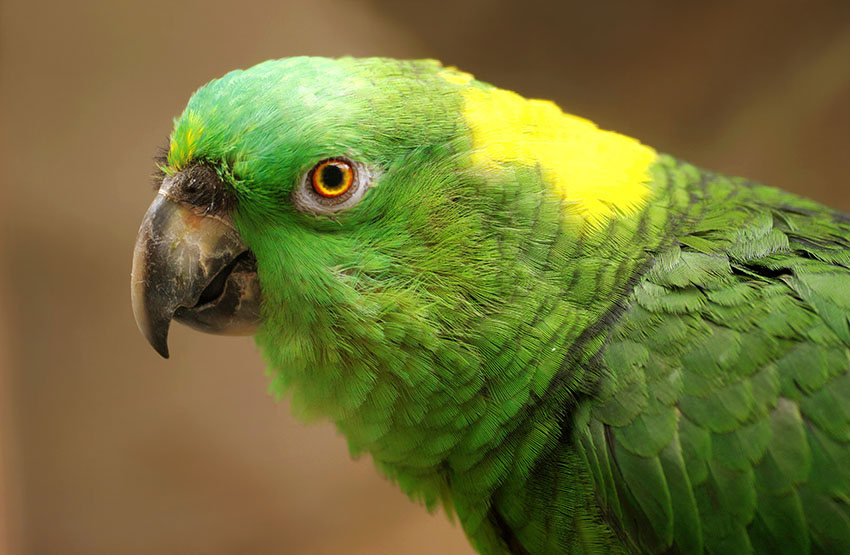 Yellow-Naped Amazons can be taught to 'fetch'


Sitting on your Shoulder

This is a great favourite of parrot owners who also happen to be fans of fictitious pirates. The reinforcement command for this one can be something like “Pieces of Eight!” or a pirate laugh; but “Come on then!” or similar is just as good! It relies on your bird being confident perching on your finger or hand. Gently move him to your shoulder and ease him on, using the chosen command and rewarding him with a treat. Once he’s happy sitting there, you can introduce movement. Walk slowly, encouraging him all the time. In the first instance stop after three or four steps and offer a treat, increasing the distance over time. Avoid loud noises, and tell everyone else in the house what you’re doing, to avoid sudden noisy intrusions. After a few weeks the parrot will feel safe and secure on your shoulder (or head – that’s another alternative), and may even allow you to move from room to room.

This is the easiest trick of all - as long as your parrot cooperates! Choose some suitable dance music, and move around to it. Your pet will watch you with great interest, and will - usually - eventually join in by bobbing his head or stepping from foot to foot on his perch. If necessary, show him a video of other parrots ‘dancing’ (YouTube is packed with this kind of stuff!). 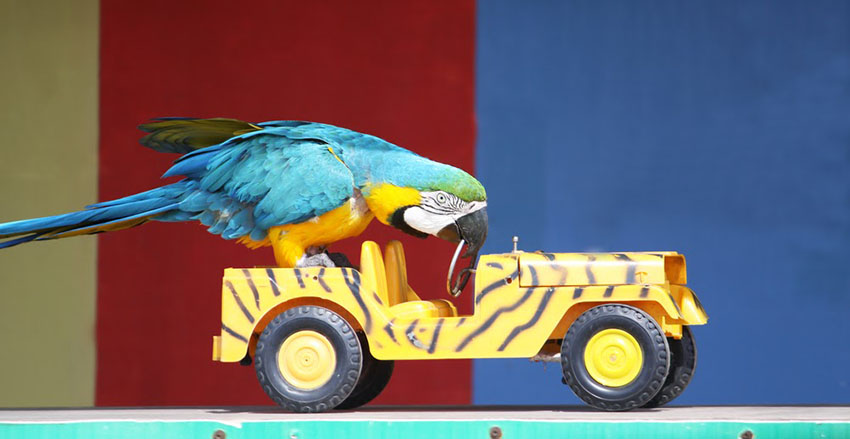 Apparently complicated manoeuvres such as skateboarding, vehicle-riding and scaling ladders are all just variants on the step-up trick, in which the parrot learns to step from one perch to another. Where motion is involved in the trick, such as in a toy car or bike, start slowly and gently, as in the Perching on Shoulder training mentioned above.

To Who It May Concern, My name is Farzana and I am writing to you today to ask a few questions that relate to my language arts project about birds and how to care for them as an interview is a requirement. The questions I would like responses for are listed below if you so wish to answer and/or view them. What should you know beforehand about birds (specifically budgies)? What are the benefits of training a bird on your own? When is the perfect age to start training birds? What are the five easiest birds to train? How to train your bird (a budgie, if possible) to fetch? Thank you for your time and have a good day. Sincerely, Farzana

My Bird Sprite won't pick it up. Do these work for budgies?

Victor, birds need daily showers. If your bird is handled a lot the feathers can get greasy from your hands and turn a blackish colour. In the wild birds bathe in water and enjoy the rain. Sunlight is also super inportant. If you feel its a liver issue check the fat content and exercise level of your parrot. Lots of fruit and high fat nuts and seeds can cause fatty liver disease. Reduce nuts and seeds and fruit and give more fresh veg and exercise if you feel this may be the case. My money is on him being handled a lot and not being given daily showers though. Hope this helps.

Victor, I asked this same question to the manager at the store where I got my B&G Macaw. She said it was due to the lack of sun. Windows tend to block different rays of the light spectrum (as do screens) meaning your bird either needs to go outside more often or at least purchase a bird lamp. Different birds require various amounts of sunlight; I recommend either taking your bird outside for an hour a day (though some say that 15 minutes will suffice) or buy the lamp (usually around $80) and put it on a timer that keeps it on at least one hour a day. That's my recommendation anyway.

Can anyone tell me why my bird's feathers have gone black the only difference being is I have been laid up in a hospital bed for 11 months so I couldn't take him out flying I have taken hymn to the avian vet and all he said was he could have a liver problem it has never happened before thank you for your help in advance p.s. he has vegetables fruits nuts so his diet is varied thank you