How To Groom A Dog's Paws

Grooming a dog’s coat is one thing, grooming his paws and looking after his feet is a slightly different matter. A dog having his paws groomed and clipped


How To Groom Your Dog’s Paws

Luckily you don’t have to go to college to become your dog’s personal manicurist. Fortunately for us, dogs will be quite happy with well maintained paws and claws without the need for a French manicure.

When bits and pieces get stuck in between the pads of your dog’s paws they can cause irritation or even enter your dog’s skin. Trimming the hair on your dog’s paws can prevent debris like grass seeds and thorns getting stuck, which is why it is so important.

Trimming your dog’s nails should be done before clipping the fur on his feet. If your dog’s nails grow too long they can break, which may cause your dog a lot of pain. Allowing your dog to exercise on hard surfaces like the road will help to maintain the correct length of nails, but if you notice that they are getting too long, you must arrange an appointment with your vet to trim them. Alternatively, you can trim them yourself, but you will have to start training early so that your dog is comfortable with you handling his paws. You will need to teach your dog to associate nail trimming with an enjoyable experience by giving him lots of treats and taking it slowly.


How To Trim Your Dog’s Nails

There are two types of nail trimmers to choose from; the conventional nail pliers and the guillotine trimmers. Both products do the job, but you might feel more comfortable using the guillotine trimmers if your dog is likely to move suddenly. Begin by getting your dog used to having his paws handled. When your dog is sitting, lift one of his paws up and touch his toes and nails for a few seconds. Reward him with a treat immediately and then place his paw back down on the ground. Repeat this process a few times until your dog is comfortable. 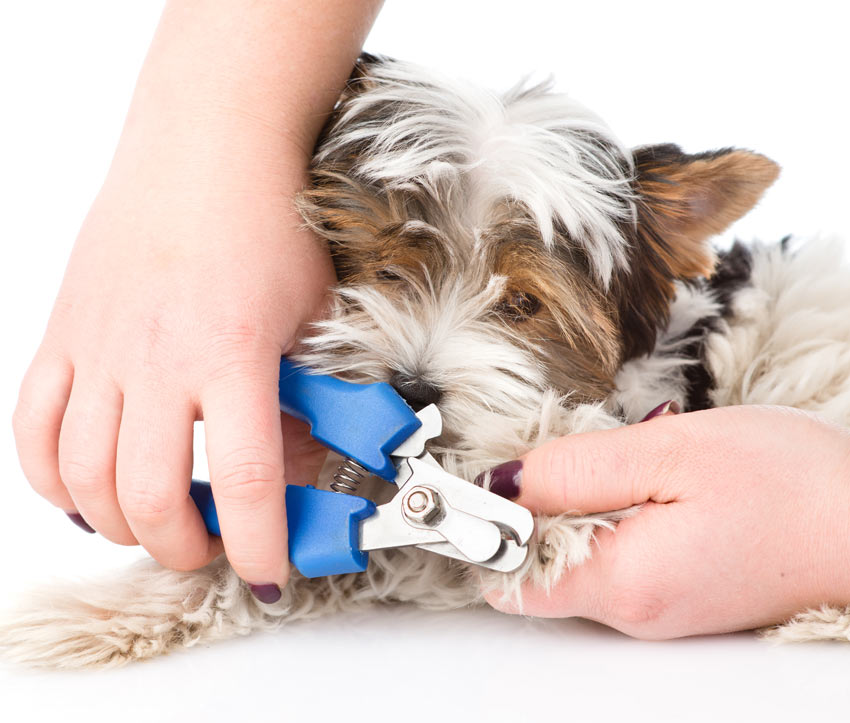 A dog getting its nails trimmed with a nail clipper 
You will need to have a clotting powder to hand to stop the bleeding if you accidently cut your dog’s sensitive ‘quick’. Firmly hold your dog’s toe between your fingers. If you are using the plier type nail trimmers, place the pliers at right angle to his nail and close them quickly to trim the nail effectively. If you are using a guillotine trimmer, face it up toward the ceiling and insert your dog’s nail. Squeeze the handle confidently to trim the nail correctly, but make sure that you have not placed the guillotine too far up the nail. A dog having a good groom getting his nails clipped


If you trim your dog’s nails too short and accidently cut his quick he will yelp and back away, but it is important that you don’t panic. The quick contains live blood vessels and it will bleed quite a lot. It may also be fairly difficult to stop. The best thing to do is to immediately give your dog a treat to bring his attention away from his paw. As you distract him with a treat, apply the clotting powder directly to the bleeding area - this should stop the bleeding. Don’t try and continue trimming your dog’s paws, allow him to rest and then try again in a couple of days time.


How To Trim Your Dog’s Paws

If you want to spare your dog the nuisance of skidding, slipping and sliding all over hard surfaces like Bambi on ice, trimming the hairs on his paws can be a great idea. Trimming your dog’s paws will prove very difficult if your dog is not comfortable with you handling them. Get him used to having his paws touched by handling him as much as you can. Teach him that it is okay to be touched and examined as soon as you invite him into your home. Get all of the family involved, and make sure that he is comfortable with his whole body being examined, including his mouth, ears and paws. How to groom your dogs paws


The best time to get your dog used to having his paws handled is when he has settled after a walk. Make him sit and then lift one of his paws up. Examine his toes and nails for a couple of seconds, reward him with a treat, and then return his foot back to the ground. You may need to repeat this process a few times. 
As soon as your dog become comfortable with you handling his paws, get him used to the scissors. Begin by trimming the hair on his paws for just a few seconds, and then reward him and return his foot to the ground. Continue doing this until you have trimmed his paws to a suitable length. After you do this a few times your dog will allow you to trim his whole paw and you will only need to give him a treat when you have finished, but never stop rewarding as your dog may become reluctant.