Rearing chicks by hand is a time-consuming, fiddly process, not to be entered into without full appreciation of what’s involved. Always seek expert advice for any aspect of chick-feeding, and take time to watch some instructional videos. This will boost your confidence, and minimise the chance of mishaps.

You may have healthy, attentive parent birds prepared to put in all the hard work, but you still need to know what to do if things don’t go to plan. Mishaps could be anything from a sick male (meaning he will be unable to feed the nesting hen bird) to an abandoned nest. Baby budgies are very delicate creatures, and if the mishap occurs early in the rearing process – within the first two weeks – your chances of weaning the bird are slim. Rearing a freshly-hatched bird is something none but the most expert breeder should attempt. 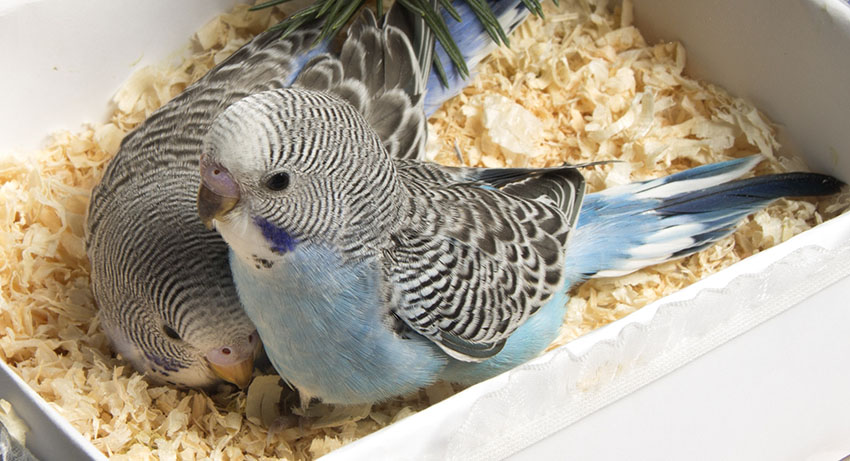 Five-week-old budgies in a nestbox

There are several budgie chick feeds and additives available commercially. These should offer the correct mix of nutrients, vitamins and minerals that a baby bird would receive in the wild state. Always check with an expert before opting for any particular brand, though, and don’t be tempted to make a choice based on what you can source cheaply online.

Chick food should be mixed according to the instructions on the packet. It will have a gloopy consistency, and, like Baby Bear’s porridge, should be neither too hot nor too cold. If hot, it can scald the bird’s crop and throat; if too cold, it may lodge and fester in the chick’s crop and result in a fatal condition known as sour crop. Again, read the instructions.

The food each chick receives should be carefully measured, and delivered at a temperature similar to that of the regurgitated seed of an adult bird (the chick’s natural food source). You can use a thermometer to measure the temperature precisely. Never be tempted to short-cut the heating with a microwave, as this can result in hot-spots in the food. Optimum temperature is between 40 and 45C (105-110F).

How to Feed Budgie Chicks

The food can be offered on a plastic spoon with bent edges (dip the end of a standard plastic teaspoon in boiling water and then bend the edges inwards – this funnels the food into a relatively narrow gap), or via a wide-nozzled syringe. You could rig up your own hybrid syringe-spoon, which is what many breeders do.

The syringe allows you to measure the quantity of food accurately and administer it one small plunge at a time. There are choking hazards to beware of, though, and so a spoon is advisable once the chick is old enough to take it this way (around ten days). The spoon allows the chick to swallow at its own pace, but does not emulate the ‘regurgitated seed’ flow of the syringe quite so well.

Experts sometimes opt for a crop needle – a tube attached to the end of a syringe and inserted directly into the chick’s crop. This is a precision job, however, and not to be undertaken unless you know exactly what you’re doing.

Whichever feeding methods you are using, all implements must be sterilised before use, and any unused food should be discarded. Don’t prepare in bulk and refrigerate – the food should always be freshly mixed and heated.

Keeping a young chick warm at all times is important when feeding them. They should be placed on a cosy towel or similar soft object for feeding. The aim is to impersonate a soft, warm hen bird as far as possible.

Tap the chick’s beak with the spoon or syringe, as its mother would, and the bird will obligingly gape (that is, open its beak to receive food). Deliver the mixture sideways on, coming in at 90 degrees to the front of the beak (i.e. don’t feed from the front: this could force the upper part of the beak too far upwards, and it’s not the way the parent birds approach the job).

Don’t syringe or pour in all the food at once. The chick needs time to swallow, and can easily choke on too much too soon. It will let you know when it’s had enough, by simply closing its beak and refusing to reopen. If the bird hasn’t eaten its usual amount, don’t force-feed it. If the lack of appetite persists for the next few feeds, seek medical advice. A blocked crop can sometimes be remedied with a small squirt of warm water and some gentle crop-massage – but you really need to know what you’re doing. Always have the vet or breeder’s phone details at hand.

The food will have cleared from the chick’s crop after two to four hours, depending on its age, and it will need feeding every three to four hours. As noted above, if the bird isn’t hungry, it won’t gape. Feeding is a full time job, at least six times a day to begin with, and you can only retire at sunset. No one said this was going to be easy!

Baby budgies grow rapidly, and their food intake needs to grow with them. At two weeks old, depending on its size, a budgie chick will take 2-4ml at each feed. At three weeks this increases to 4-6ml, and 5-8ml by five weeks.

Things become easier at three weeks. The budgie chick now resembles an unkempt miniature dinosaur, with a pleasingly ugly mix of down and pin feathers, and a lot of the character and curiosity that will stay with it throughout its life. Feeding is not quite such an all-consuming task now – every four hours, usually. The bird will still happily receive your attentions throughout 16 hours in a long summer’s day, though. 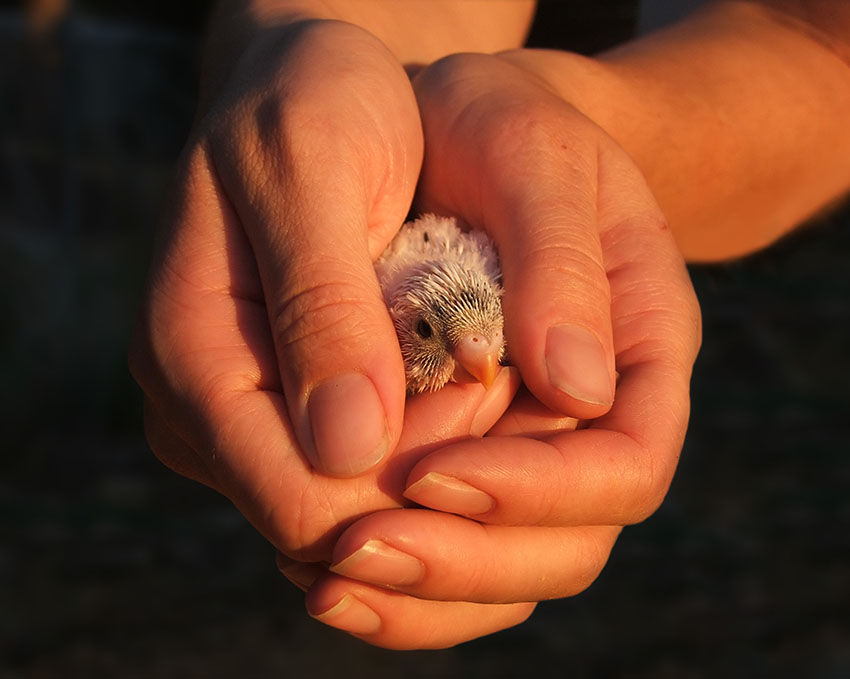 At five weeks you can start putting food on the ground or in bowls, and letting the budgie indulge its natural instinct to forage. By six or seven weeks the bird will probably be self-sufficient. You’ll need to keep an eye on its dining behaviour, however, as not all budgies take to independence as swiftly as the average bird. Some hand-feeding may still be required at seven weeks. 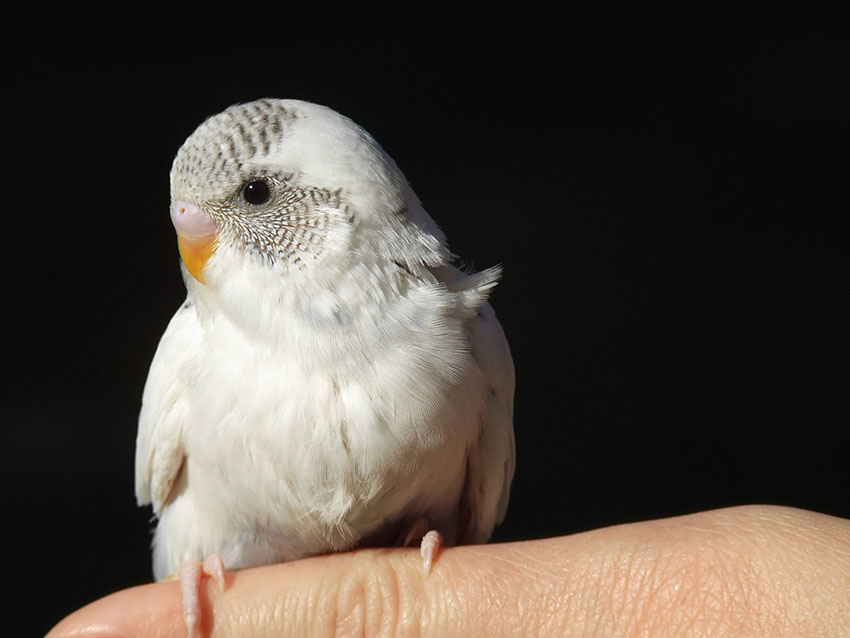 My hen abandoned her eggs and i needed to rear them. They are 2-3 days old... Do i have to feed them every 2-3 hours even at night or can they go longer at night and i can feed them first thing in the morning? PLZ HELP

Hi there I need some help if got two baby budgies at the age of 2 weeks. The female abandoned them. The only concern I have is i cant use any egg food as my son has a serious allergies and has to use epi-pens. Is there anything else I can do to feed them please. Thank you

My budgie is 3years old on his back he has started growing like fluff it looks like a feather duster what is.it?

How long do I need to put egg food in the cage for the adult birds to feed thier 2 babies ?

HELP! I’ve been hand feeding a clutch of baby budgies for the last 16 days (since the youngest was 2 days old). Must I continue to feed them every few hours even at night? Do they not sleep at night? How soon until I can sleep at night? Can they at least go longer between feedings at night?