Budgies have been kept as pets since the mid-1800s, less than a century after first being spotted by Europeans. British sailors returning from their epic voyage to the east coast of Australia with Captain James Cook in 1770 reported seeing flocks of small green birds in such huge numbers that they blocked out the sun. They didn’t have a name for them yet, but these were undoubtedly budgerigars. 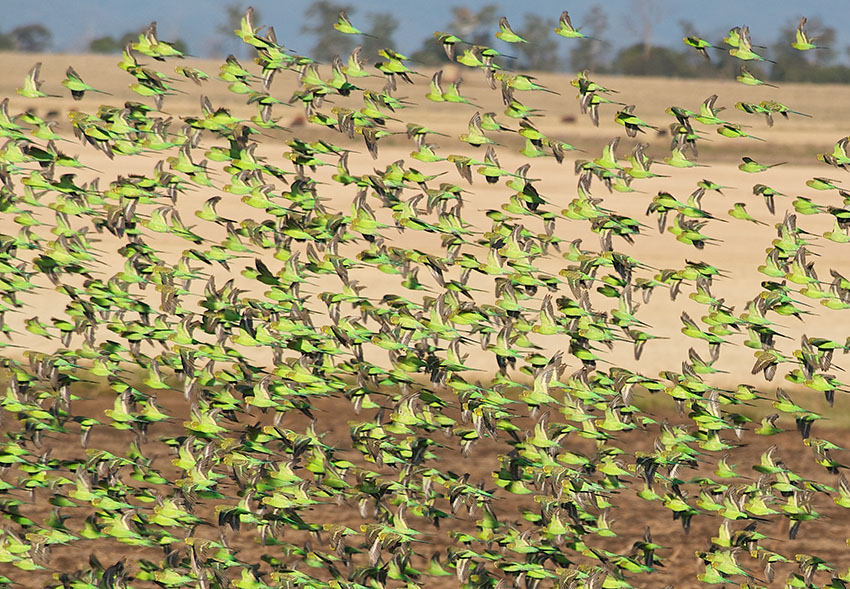 Budgies in the wild


The budgie was added to the tick-list of known species in 1805, when the British Museum natural history department’s assistant keeper George Shaw first described it for the scientific community. But it was not until 1840 that the first pair was brought to England, by English bird enthusiast and artist John Gould. The birds were included in Gould’s mammoth book, Birds of Australia, researched and compiled during the 1830s, describing 681 Australian birds, and with coloured prints depicting each one. It was originally published between 1840 and 1848 in 36 parts, later collected into eight volumes.

Gould described budgerigars as “the most animated, cheerful little creatures you can possibly imagine”, also noting that they were good to eat. He stated that the bird was uncommon. It is possible that he was not encountering the biggest flocks, and getting a skewed impression of the population as a result. Alternatively, the scarcity may have been linked to the expansion of Australian sheep-farming. The budgie is a ground-feeding bird, a grass and seed specialist, and wherever sheep appeared (not to mention that most unwelcome of Australian hitchhikers, the European rabbit), there was little or no seeding grass available for the birds.

Regardless of its relative scarcity in nineteenth century Australia, the budgie soon became very common in the aviaries of Europe, and its popularity has never waned. Mercifully, the question of the bird’s tastiness has not been pursued.

Queen Victoria was given a pair of budgies in 1845. Twenty years later the bird was being imported in barely sustainable quantities. Gould noted that every ship coming to England from South Australia included budgerigars in its cargo, and claimed that he had seen bird dealers in Wapping with more than two thousand budgies to sell.

Australia, alarmed at the depletion of native stocks, banned the export of budgies in 1894, by which time breeders in Europe were producing thousands of new birds. America was more of a slow-burner – birds were being kept in the 1920s, but the country only really caught the budgie bug in the 1950s.

The successful breeding of the bird in Europe accelerated its conquest of the continent’s bird cages. By the end of the nineteenth century it was being kept by the full range of Queen Victoria’s bird-brained subjects, from aristocrats to London cab drivers. why is my budgie having hair loss