How Is an Egg Made?

Chickens are amazing! When your hens are laying well, they will produce a new egg every 25.5 hours. This is a very short time to create something as complex, as perfect and as tasty as an egg. 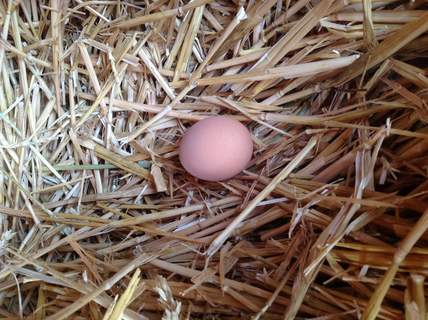 
An egg is made from the inside out. The yolk is made first, and then wrapped in a layer of egg white, before being neatly and beautifully packaged up in an egg shell.

The beginning of an egg is the tiny ova which takes a week to grow into a proper egg yolk. If you cut a boiled egg in half and look at the yolk, the dark rings were layers made during the day and the light layers during the hours of darkness. Strange but true!

When the yolk is ready it is released along the oviduct. The first part of the oviduct is where the egg white (albumen) is added. The egg white mainly consists of protein, water and minerals.

Then the egg carries on along the oviduct where it grows two connecting strands at the top and the bottom called chalaza, which anchor the yolk to the shell keeping it in the centre of the egg.

The next stage is for the shell membranes to form around the white. After this the egg continues down into the uterus where the shell is added. The shell is made from calcium carbonate, which is also found in marble and chalk. The shell is a great bit of design, it is on average only 0.3mm thick but it is incredibly strong. Thank you. This helped me with many lockdown sanity questions about life.

Thanks this was really helpfull

This helped me with social studies

I am animal science student, so this information is important to me. Thanks!