Budgies are mimics, and will add all manner of sounds to their repertoire. The parrot family, including the budgie, can’t play back sound in the unnervingly accurate ‘digital-recorder’ manner of a Mynah bird or Lyre bird. They give everything a characterful parrot spin, a sound that comes straight from their unique personality.

With a background of human conversation, backed up by the various audio-visual devices in your home, you’ll be priming your budgie for talking. The sound of voices will be something the bird will take to naturally, if it has always been part of his environment. Sometimes his efforts will not be recognisable as human words – budgies take sounds and make them their own – but if you strike lucky, one day you’ll hear him say something intelligible. And even though you know he doesn’t actually understand the meaning of the words, that first “Hello Mango!” (or whatever you’ve taught him) is always a thrill. 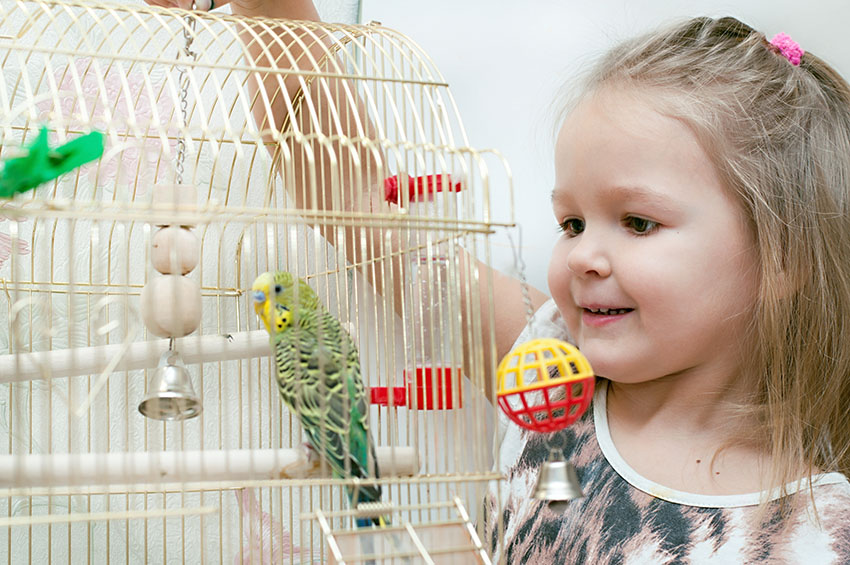 If your budgie lives with other birds (which is the preferable set up), it will be tricky to cut through the bird chatter and make a few human words stick. Even a mirror can be a distraction preventing him from hanging on your every word. It’s certainly true that single birds are in with a better chance of hearing exactly what you’re saying; but unless you can be there for them as constantly as a budgie companion, singletons will always miss the company of other budgies. It’s wired into their biology. It’s better to have a happy budgie than a talking one, if the choice has to be made.

Males are your best bet if you want a talking budgie, and younger ones (more than four months old) will take to it more readily. There is no guarantee of success, so don’t be too disheartened if your bird never gets to grips with speech. Some are wired for human sounds, some aren’t. For every Disco and Puck (celebrated talking budgies whose abilities can be marvelled at via an internet search), or any less impressive but still talkative budgie, there are several others who never mustered a single word, in spite of receiving lots of training and attention. Please can you help, my Budgie is banging his swing and hanging bell toy, why is this?

My parakeet is a male lonley bird he always hits his head when he fly's around will this damage anything?

I have a 16 yr old love bird with "star gazing syndrome" he is responding well to antibiotics. My question is, is it contagious? I have budgies in a cage right next to him & was a little worried...

I found your website very interesting.i have had several budgies, who were fun and learned to talk and always interested e.g when food or new toy put in cage,but my new boy about 4 months old is not interested in anything, doesnt try any new foods, gets on my finger but flys off immediately, as does the same with my husband,we are home all day and chat to him all the time.also he doesnt clean his bottom, i hav tried light spraying but he hates it and hardly has any water to drink and doesnt try and wash in his water. Any tips other than above would help.thanks.