Around 16 different vocalisations have been identified in cats. There are probably many more than this but as humans we don’t pick up on the subtle differences. The noise your cat is making will tell you exactly how she is feeling, whether that be the happy purr or the angry hiss. 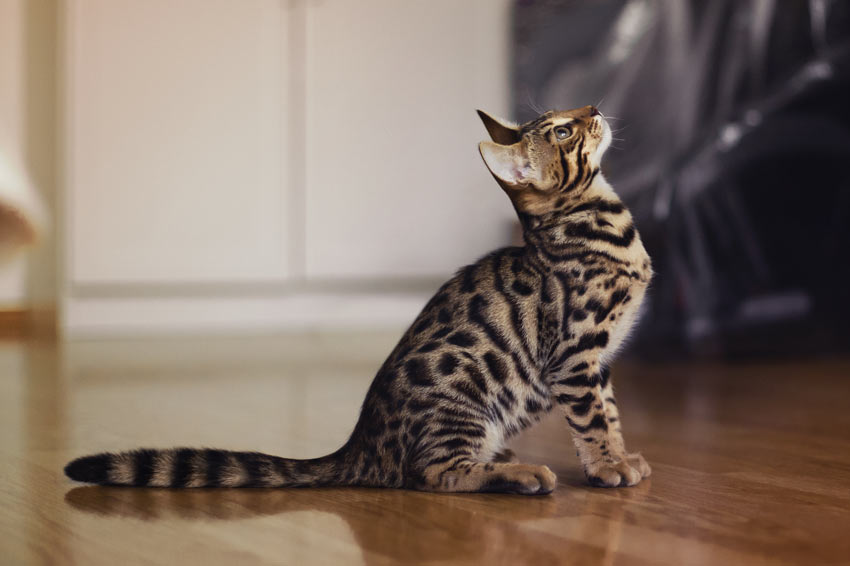 A very clever Bengal Cat who can even be trained


Why Do Cats Purr?

Did you know that not all felines can purr? Lions, Tigers, Jaguars, and Leopards all roar, but they cannot purr. Purring is one of the first sounds a kitten will make. As they nurse from their mother they will gently purr. From this young age purring is associated with positive experiences such as feeding, playing with their littermates, and grooming.

There are several theories surrounding how cats purr. One theory is that turbulence in the bloodstream causes a vibration in the chest and windpipe, which causes resonation in the sinus cavities of the skull. Another theory suggests that the muscles of the diaphragm and larynx contract out of phase causing the purr vibration. A third theory, that is backed up by scientific studies, suggests that cats use the vocal folds and muscles on the larynx to alternately dilate and constrict the glottis (the opening between the vocal chords and upper part of the larynx). This causes the air to vibrate which produces the purr sound.

It is believed that cats purr when they are relaxed and happy, however purring isn’t restricted to happiness. Cats also purr as a way of self soothing in stressful situations, or when they are hurt. Some scientists believe that the frequency of a purr (26 Hertz) promotes tissue regeneration, and that when cats purr they are healing themselves or strengthening bones. Your cat may purr when she is hungry (usually louder purring), and dominant cats will sometimes purr when approaching a submissive cat to signal they come in peace.


Why Do Cats Chatter Their Teeth?

Cats will often chatter their teeth when they see something they want to catch. Whether that be a bird in the garden or a fly buzzing against the window, it is always amusing to see a cat chattering away. Your cat's jaw will be juddering and she will be making a stuttering sound. Scientists believe that cats do this in excitement or frustration when they spot potential prey. The jaw movement occurs because the cat is practicing her killing bite as if her prey is in her mouth.


Why Do Cats Meow?

Alongside purring, meowing is the first sound a kitten will make. Meowing is the main way your furry feline will try to get your attention. When she is hungry, thirsty, wants a stroke, or needs letting out your cat will meow until you satisfy her needs. Some scientists believe that cats meow specifically to communicate with humans, and that it's rare that adult cats meow in the same manner to other adult cats. When your cat's meow is high pitch and short she is usually just greeting you. If the meow is drawn out, this can mean she wants something from you. A low pitch drawn out meow can mean she is agitated and wants her request to be answered immediately. To understand what your cat is after you need to put her meow into context. If she is standing at the door meowing loudly she probably wants to be let out. If she is looking at her food bowl and meowing, then you can assume she is hungry. If you have your legs crossed and she is sat by you meowing, then she would probably like you to unfold them so she can cuddle up on your lap.


Why Do Cats Growl And Hiss?

When your cat is feeling scared, frightened, threatened, or aggressive she will growl and hiss. Cats growl and hiss as a warning before they attack. If your cat is hissing and growling at you, you need to leave her alone as she will likely lash out at you if you keep bothering her. A growl and hiss will be accompanied by anxious, fearful or angry body language. 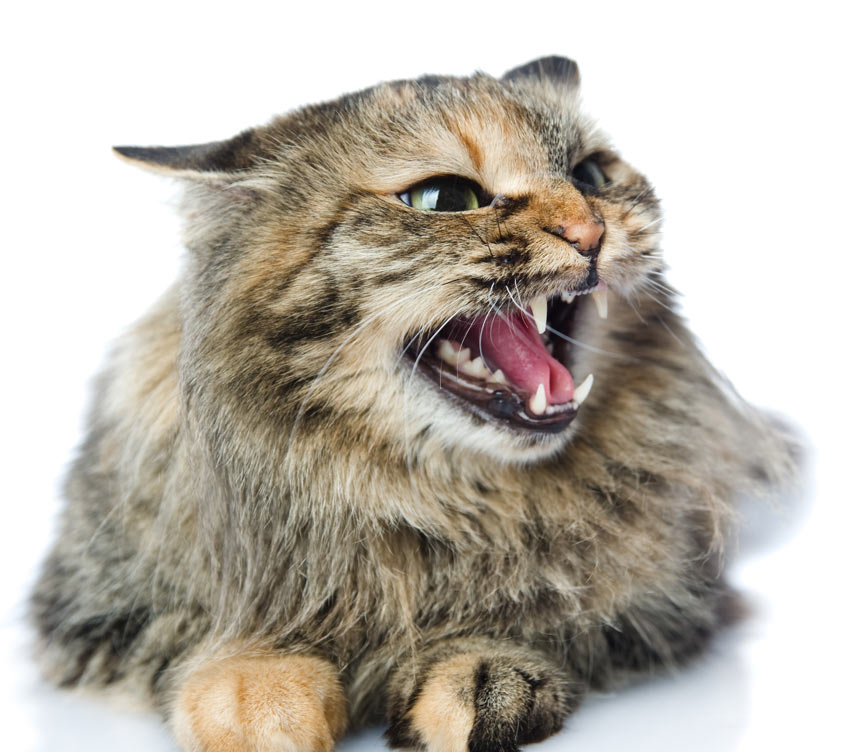 
Why Do Cats Yowl And Caterwaul?

Cat’s tend to yowl when they are communicating with each other. When you hear cats being noisy at night they are usually always yowling. Its a very distinctive sound that is a long drawn out wail. Cats yowl when they are defending their territory, fighting, or in pain. Un-neutered cats will caterwaul, which is a version of a yowl. When in heat female cats will caterwaul (frequently and noisily) and try their best to escape to find a mate. Tomcats will also caterwaul to call to females in heat.


Why Do Cats Chirp And Trill?

This sound is inbetween a meow and purr. It sounds like a vibrating meow. Your cat will have learned this from her mother. Mother cats will trill or chirp at their kittens to get their attention usually when she wants them to follow her. Your cat will very likely use this sound to get your attention or as a friendly greeting.

Hello My 13 year old tabby ,named Spaz caterwauls every morning between 5am and 7 am without fail He hss been fixed ,from 6 months.He has food and wster . Why