Dog Breed Groups are essentially trait groupings that categorise dogs by their behaviour and the roles that they were once bred for... hunting, retrieving, guarding, controlling pests and being loyal companions. The dog breed groups are defined by various organisations around the world, with the most popular groupings being set by the Kennel Club (UK).

The 7 dog breed groups are:

Think tweed, pheasants, classic British countryside. You are bound to picture a few famous British gun dog breeds right? All gun dog breeds are primarily working dogs that were developed to accompany the sporting owner. They are loyal companions and respond well to retrieving. Often referred to as ‘bird dogs’ due to their working instinct to retrieve game, these hunting dogs are dedicated to their owners and the old English sport of shooting. 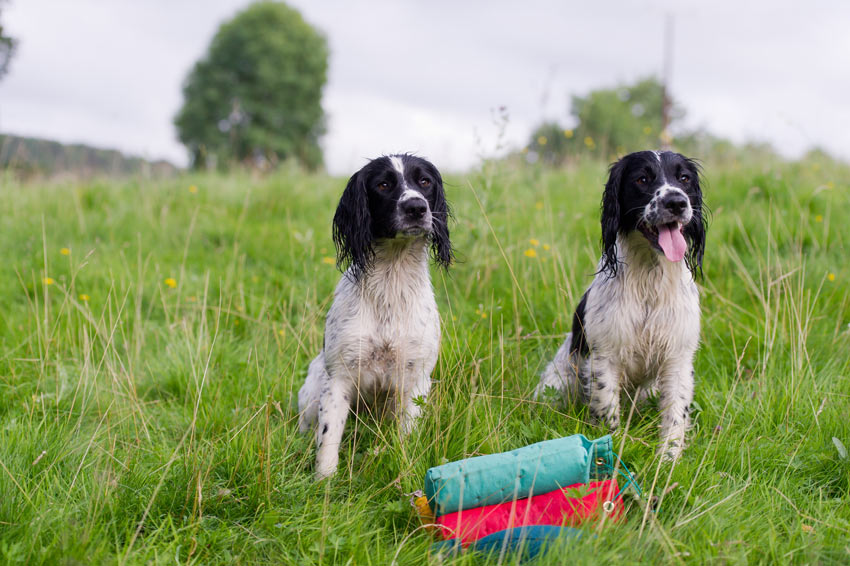 A Sussex Spaniel Gundog with a bird in its mouth 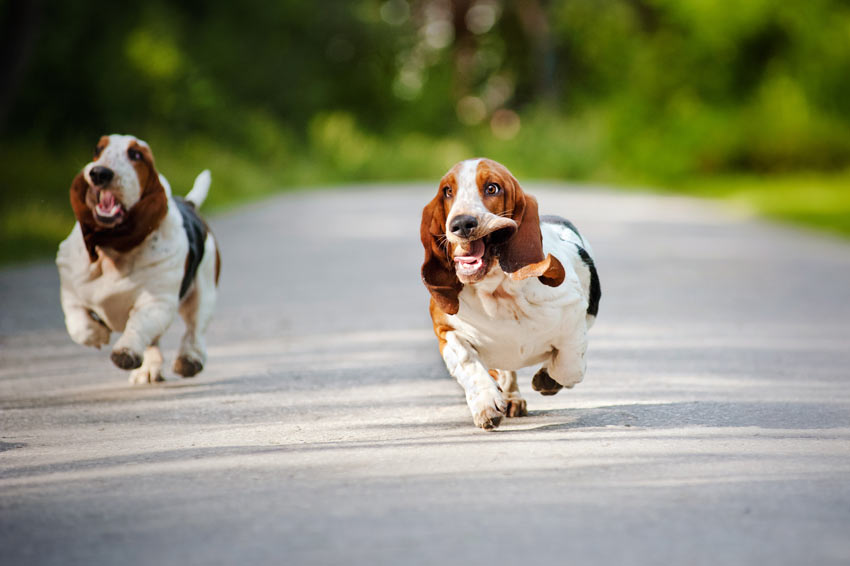 
Hounds have very independent minds and are not the kind of dog that responds reliably to a command. They must be physically and mentally active to prevent stubborn behaviour. Hounds are very prone to wandering off, which is why it is always best to exercise one in a secure area and on a lead. If something interesting catches their eye, or they pick up on a scent trail they will be off at full speed and there may be no stopping them.


Scent Hounds
Scent hounds are known to have the most sensitive noses of all dogs. Amongst many others, they include the Foxhound, the Basset Hound, the Bloodhound, the Beagle and the Dachshund. Scent hounds love the sound of their own voice, and will use it to let their leader know where they are when following a scent. However, for owners who do not intend to use their dog for hunting, it can often be seen as an annoying trait. 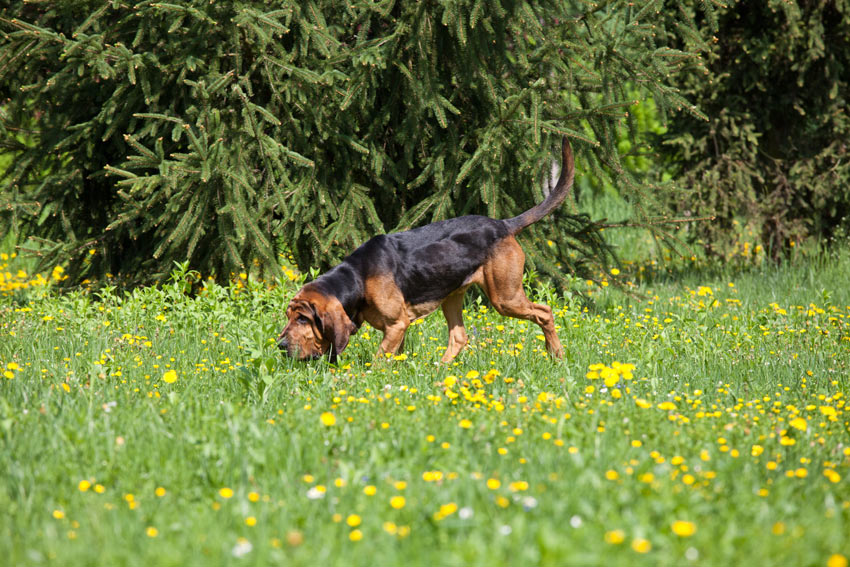 
Sight Hounds
Sight hounds were developed to hunt at impressive speeds and although these breeds love the chance to gallop at full stretch, they are also more than happy to relax all day on the sofa, especially in their adult years. These include the Afghan Hound, the Borzoi, the Greyhound, the Irish Wolfhound, the Italian Greyhound, the Saluki, the Scottish Deerhound and the Whippet. 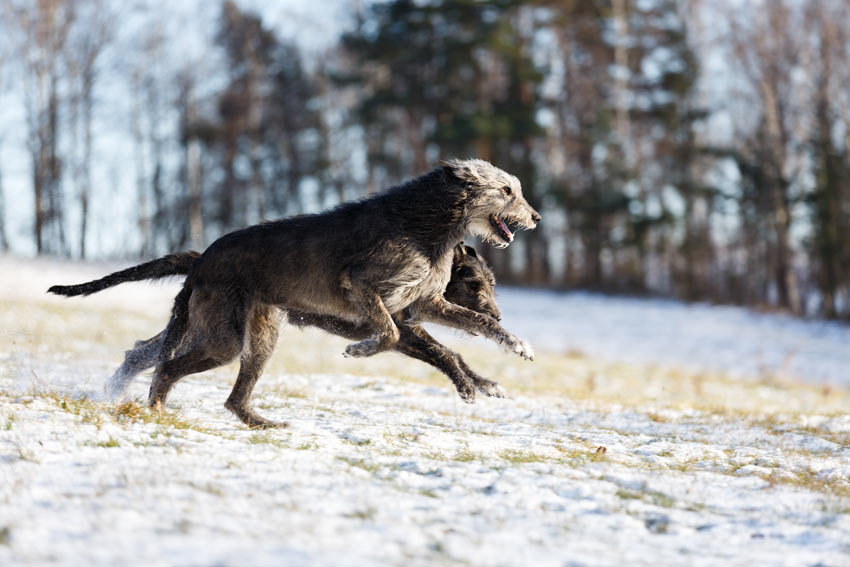 Dogs in the pastoral group have been bred to either herd or guard livestock. If you have ever seen the dreadlocks of a Komondor you may be surprised to hear that these coats serve a practical purpose in the working environment. The corded coat of dogs like the Komondor and the Puli provide them with protection from wolves that they may have to fight in order to protect their flocks. 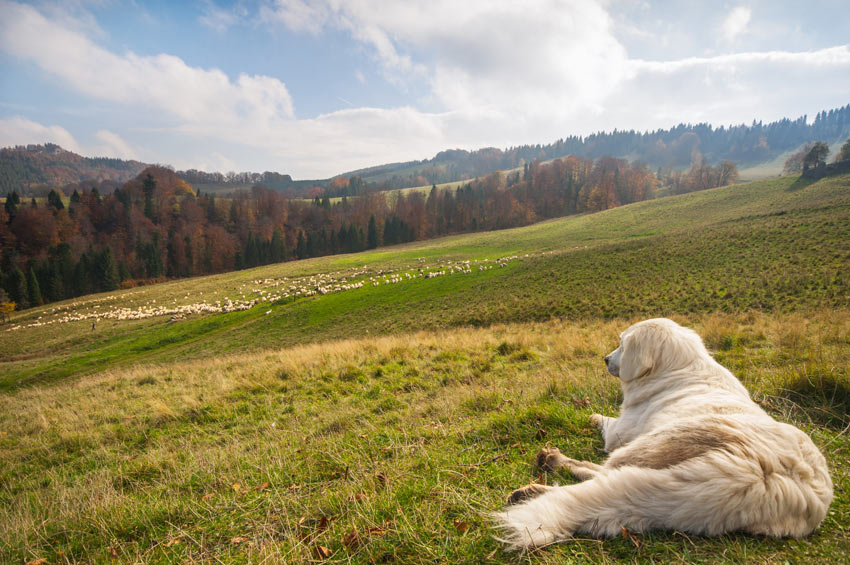 A Sheepdog resting before guarding a flock of sheep


Herding Dogs
The most common herding dogs include the Border Collie, the German Shepherd Dog, and the Australian Shepherd Dog. They are incredibly intelligent and must be given regular tasks with plenty of mental stimulation to keep them occupied. If they are not given enough exercise, they are likely to cause mischief. Providing they get all of this, herding dogs are very loyal and make great family pets. They have been known to herd small children, so if you are looking for an extra hand around the house, a Collie may be perfect for you. 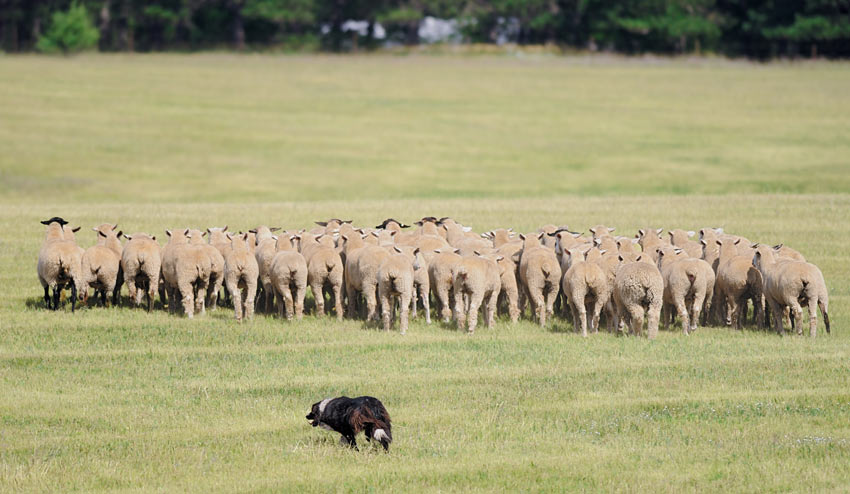 A Border Collie moving a flock of sheep


Guard Dogs
Guard dogs have been bred for their physical strength, loyalty and courage. When trained correctly, these breeds tend to be calm and gentle, but their guarding instincts can make them rather unpredictable. For this reason, before owning a guard dog it is recommended that you have previous experience of owning another dog. 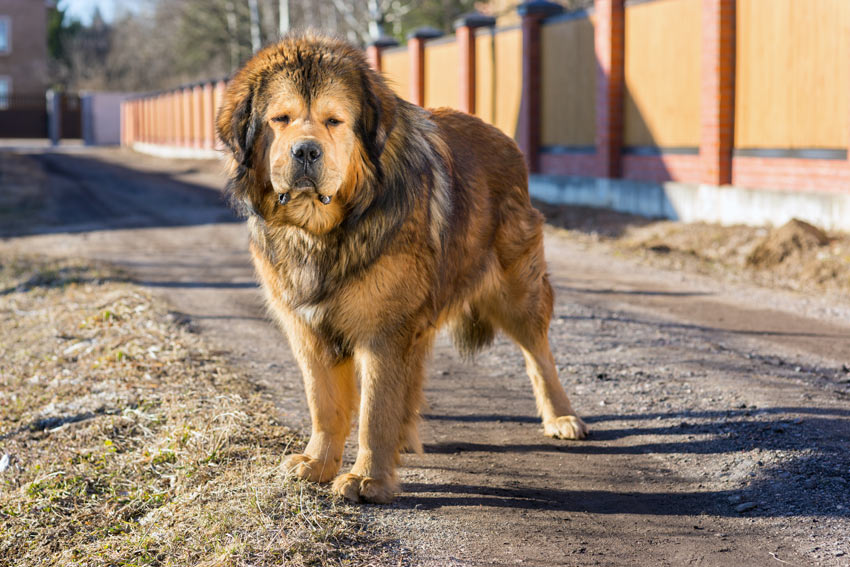 Breeds that are used more as guard dogs include the Bullmastiff, the Doberman Pinscher, the German Shepherd, the Komondor, and the Kuvasz, the Mastiff, the Puli, the Rhodesian Ridgeback, the Rottweiler, the Tibetan Mastiff and the Staffordshire Bull Terrier.

If you are thinking about getting a guard dog and you have children, spend some time choosing the best breed for you and your family. German Shepherd Dogs are often considered the best guard dog for families with children. When loved and trained correctly, this breed is extremely obedient and make wonderful companions for adults and children.

Working dogs come in all shapes and sizes, from the huge Saint Bernard with a brandy barrel round its neck (used to warm avalanche victims), to the nimble Siberian Husky which is used to pull goods across the icy tundra. These dogs tend not to make the most perfect home pets, unless you are able to provide them with a great deal of exercise and mental stimulation. This group of dogs are also the current record holders for world’s most expensive dog with a Tibetan Mastiff being bought for an estimated £945,000! 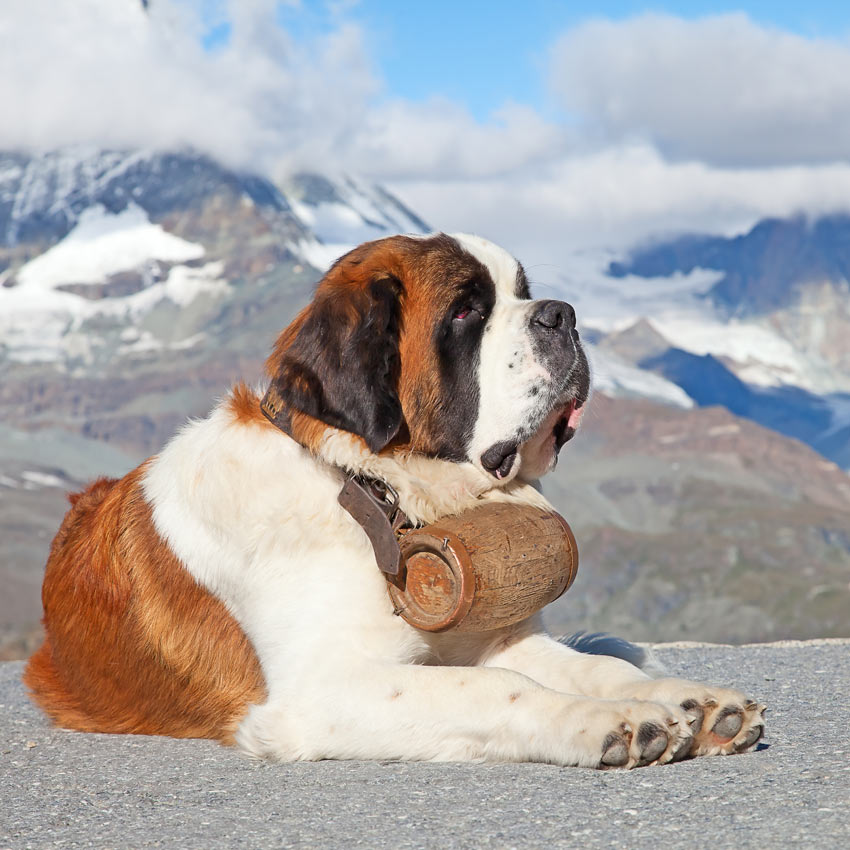 A Saint Bernard with barrel of brandy around his neck


Pulling Dogs
Breeds that were developed for ‘pulling’ work such as the Siberian Husky and the Alaskan Malamute, are attractive, athletic dogs, built to work in harsh conditions for long periods. Sled dogs can reach speeds of up to 20 mph and can cover distances of 25-30 miles during a race. 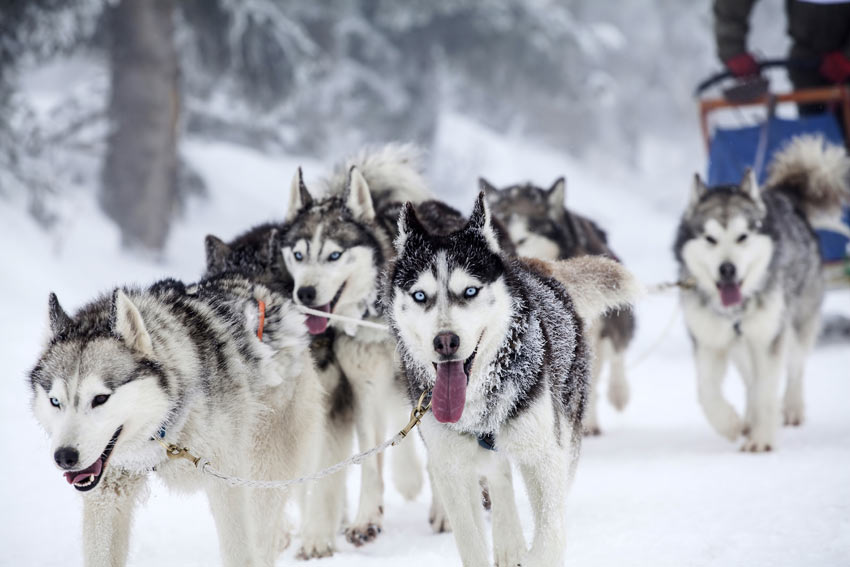 A pack of Siberian Huskies pulling a sled


These breeds may also not adapt very well to a pet lifestyle unless you can provide them with the strenuous exercise they require. If you are considering getting a ‘pulling’ working dog, you may want to invest in a working dog harness so that you can control your dog’s tremendous strength when on the lead (otherwise you might find that you are the one being taken for a walk).

The name Terrier comes from the Latin word ‘terra’ meaning earth and the french name ‘chien terrier’ which translates directly to ‘dog of the earth’. Terriers were once developed as farm dogs for ratting and controlling foxes, which is why they are both fearless and small enough to fit down holes. 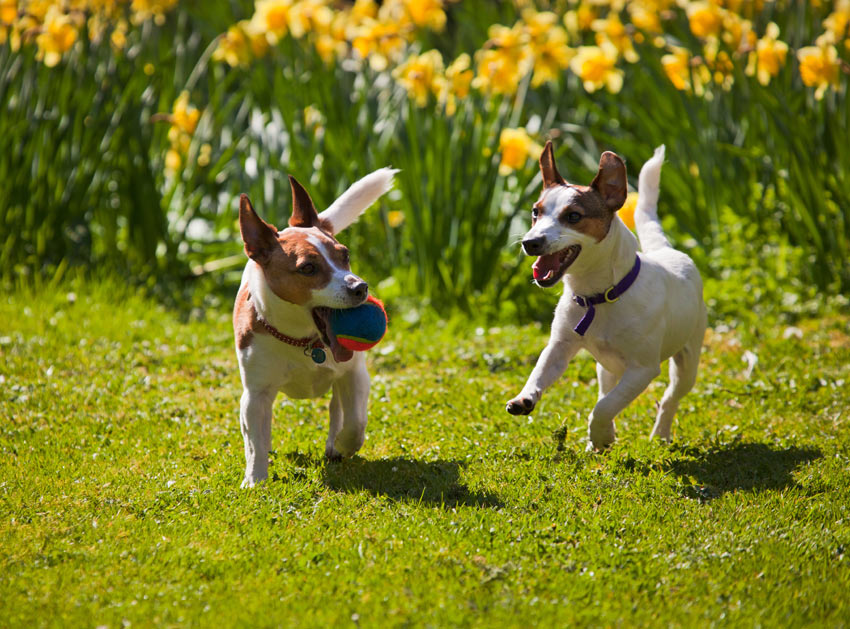 
They are typically excitable dogs with mischievous temperaments. These traits are very uniform amongst all Terriers. In fact they are so much fun, you can waste hours and hours watching cute Terrier puppies play on YouTube. 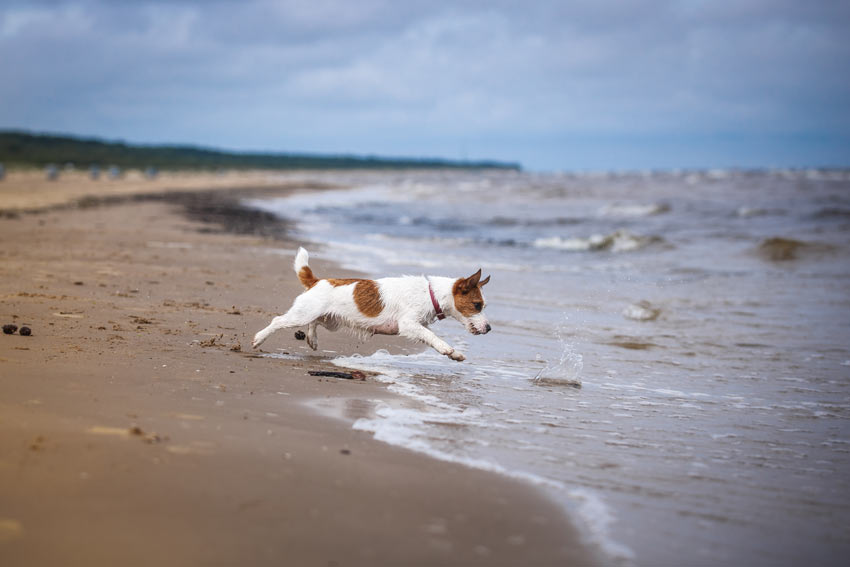 These lovely lap-sized dogs were developed to be close companions and so thrive on love and affection. They are friendly, playful and full of energy, which is why they are great to have around.

Toy dogs typically become very attached to one person and if this behaviour develops your dog can become very protective and may show aggression towards anybody else who comes close. To prevent this, it is important to socialise toy dogs with plenty of visitors and other dogs from an early age. 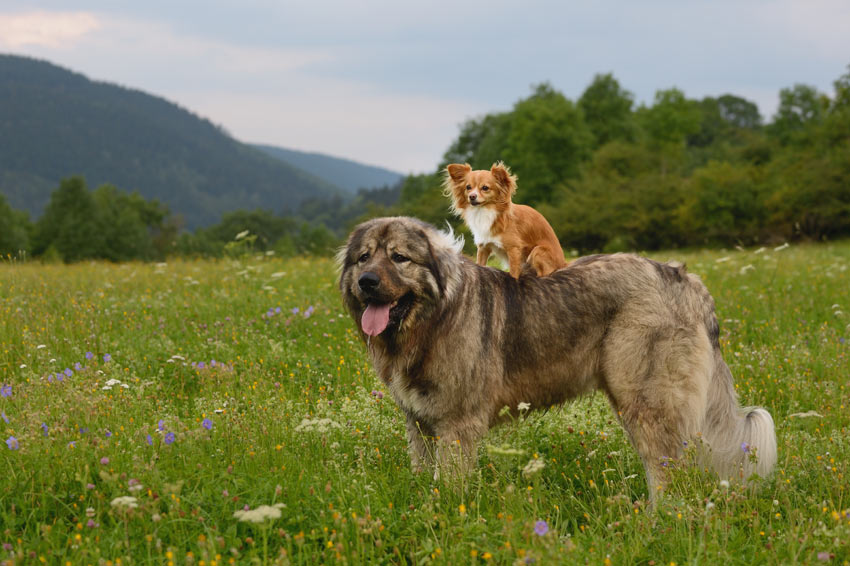 
Toy dog breeds include the Bichon Frise, the Brussels Griffon, the Cavalier King Charles Spaniel, the Chihuahua, the Chinese Crested, the Havanese, the Italian Greyhound, the Maltese, the Miniature Bull Terrier, the Pekingese, the Pomeranian, the Pug, the West Highland Terrier, the Shih Tzu, the Toy Poodle and the Yorkshire Terrier.

A word like utility may bring dishwashers and washing machines to mind, but this group is used to categorize all of the breeds that do not fit into any of the other groups by the standards of the UK Kennel Club.


A Dalmatian, a Utility Dog


Utility dogs refers to an extremely varied group of dog breeds that were once developed for a specific job, but these jobs no longer exist or are not carried out by dogs anymore. An example of this is the Dalmatian, which was bred to run alongside horse carts. 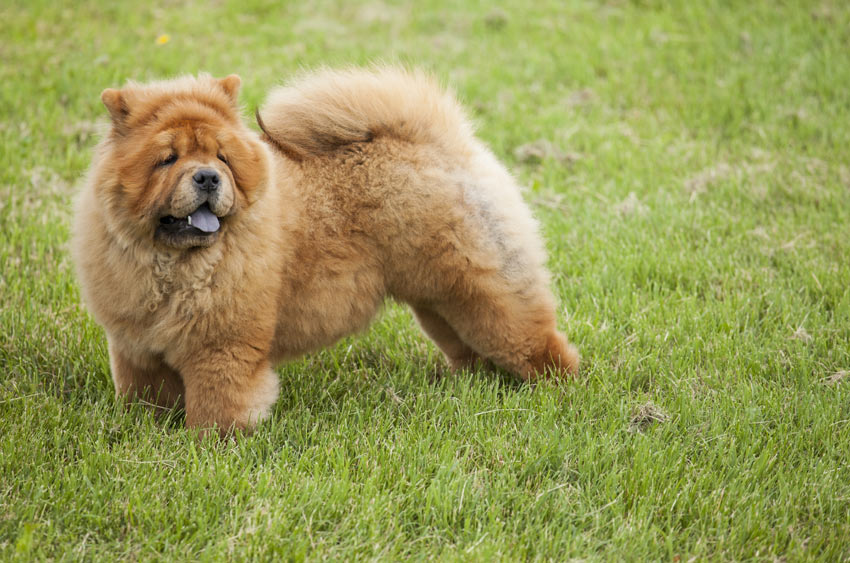 
The utility dog breeds include the Akita, the Boston Terrier, Chow Chow, the Dalmatian, the English Bulldog, the French Bulldog, the German Spitz, the Japanese Shiba Inu, the Keeshond, the Lhasa Apso, the Mexican Hairless, the Miniature Schnauzer, the Poodle, the Shar Pei, the Shih Tzu, the Tibetan Spaniel and the Tibetan Terrier.